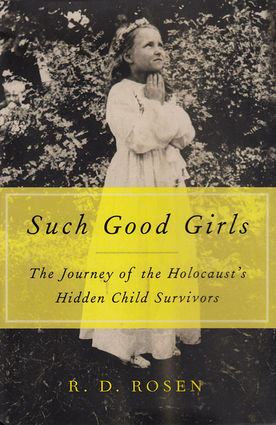 Three girls who survived their survival

Such Good Girls: The Journey of the Holocaust's Hidden Child Survivors

A five-year-old girl who slipped out of the Lvov, Poland, ghetto with her mother, who, thanks to her fluency in German, found work as a bookkeeper for a Nazi. A six-year-old schoolgirl who somehow knew not to raise her hand when her schoolteacher in Southern France suddenly asked which students were Jewish. A family that barely made a noise for more than two years while living in a strange apartment in Delft, Holland, while the owner cut German soldiers' hair in his barber shop a few feet away. For hidden child survivors, circumstances like these meant the difference between life and death in Hitler's Europe.

In "Such Good Girls: The Journey of the Holocaust's Hidden Child Survivors," acclaimed author R.D. Rosen provides a portal into the world of the very few and very lucky Jewish children-one in ten-who survived the Holocaust in hiding. With skill and sensitivity, Rosen illuminates an untold corner of 20th century history by sharing the powerful stories of three "good girls" who did as they were told and lived to share the details of their journeys after decades of silence.

Such Good Girls follows Sophie Turner-Zaretsky, Flora Hogman, and Carla Lessing-members of the last generation to witness the Holocaust-from their childhoods as hunted prey in Poland, France, and Holland to their adulthoods in New York, where they created meaningful lives as a doctor, a psychologist, and a social worker.

Most books about the Holocaust are written by survivors or historians. As a journalist and mystery novelist, Rosen is uniquely positioned to persist through the fear and resistance of Sophie, Flora, and Carla in order to understand and tell their astonishing stories of survival and continued struggle to create a new, post-war identity.

Rosen reveals the tragedy of an entire generation of hidden child survivors who found it almost impossible to escape their loss and shame. For years they endured, entirely alone, through their suffering and confusion, as well as the indifference even of many older Holocaust survivors. It wasn't until 1991 that a small group that included Sophie and Flora organized their generation's pivotal, healing event: the First International Gathering of Hidden Child Survivors, where adult hidden children finally made themselves visible to each other and tried to reclaim their original identities. Here, SUCH GOOD GIRLS expands to explore the religious repercussions of their childhoods and, most unspeakable of all, the childhood sexual abuse experienced at the hands of both their saviors and their biological parents.

Despite its harrowing depiction of incomprehensible suffering, Such Good Girls is ultimately not about victims, but about human beings who survived to transcend unimaginable tragedy and achieve meaning and success.

R.D. Rosen has written and coauthored numerous books spanning different genres-from an Edgar Award-winning mystery novel to narrative nonfiction like Psychobabble (a word he coined in 1975) and A Buffalo in the House: The Extraordinary Story of Charlie and His Family, a book that connects a modern New Mexico couple's adoption of an orphaned buffalo to the near-extinction of the American buffalo species in the 19th century. Rosen has also appeared as a humorist and satirist on PBS, HBO, and NPR's "All Things Considered." For more information, visit http://www.rdrosen.com.