Fight to bring Pollard to Israel will outlast his release 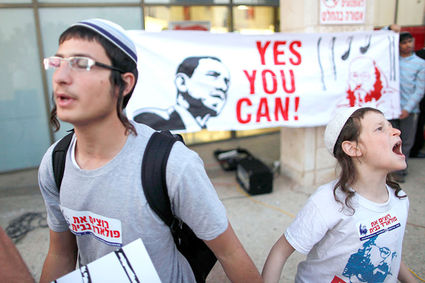 Israelis calling for the release of convicted spy Jonathan Pollard in Jerusalem, March 21, 2013.

WASHINGTON (JTA)-President Barack Obama will not alter the terms of Jonathan Pollard's parole once he is released, a signal that Israel's struggle to bring him to the country whose citizenship he has assumed will outlast his November release date.

"Mr. Pollard will serve his sentence as mandated by statute for the very serious crimes he committed," Alistair Baskey, a National Security Council spokesman, said in a statement emailed to JTA. "The president has no intention of altering the terms of Mr. Pollard's parole."

It is not clear what if any parole terms may be imposed on the convicted Israeli spy upon his Nov. 20 release after serving 30 years in a federal prison. His lawyers in a statement Tuesday said that Pollard would be required to remain in the United States for five years. Within minutes, however, Eliot Lauer and Jacques Semmelman issued a corrected release removing that sentence.

"President Obama, who has the constitutional power of executive clemency, has the authority to release Mr. Pollard before November 21, 2015, as well as the authority to allow Mr. Pollard to leave the United States and move to Israel immediately," the statement said, noting Pollard's mandated release date by statute.

A Justice Department spokesman told JTA that the Parole Commission's communication with the lawyers for Pollard was not available to the public, and Semmelman and Lauer told JTA that they were not ready to release it.

The lawyers have secured lodging and employment for Pollard in the New York area once he is released.

Israeli officials and U.S. advocacy groups for years have called for the release of Pollard, a civilian U.S. Navy analyst arrested in 1985 and sentenced to life in 1987 for spying for Israel. The hope is that he would immediately move to Israel.

A number of Israeli officials rushed to express the hope that they would greet him on his arrival in Israel, but Prime Minister Benjamin Netanyahu was cautious, stopping short of looking forward to Pollard's arrival in a short statement he released after he spoke with Pollard's wife, Esther.

"After decades of effort, Jonathan Pollard will finally be released," Netanyahu said. "Throughout his time in prison, I consistently raised the issue of his release in my meetings and conversations with the leadership of successive U.S. administrations. We are looking forward to his release."

In 1995, Pollard was granted Israeli citizenship, in part because he hoped to travel to Israel as soon as he was released.

"The Department of Justice has always maintained that Jonathan Pollard should serve his full sentence for the serious crimes he committed, which in this case is a 30-year sentence, as mandated by statute, ending Nov. 21, 2015," Justice Department spokesman Marc Raimondi said in an email to JTA. Another spokesman later clarified that under the law at the time Pollard was prosecuted, "an individual would be presumed eligible for mandatory parole once they had served two thirds of their sentence. Thirty years is two thirds of 45."

Obama administration officials have been at pains to distinguish between the Nov. 20 parole and the earlier denied requests.

A number of media reports and critics of the Obama administration have said that Pollard's release is compensation to Israel for the Iran nuclear deal reached between the major powers and Iran on July 14. Israel's government rejects the deal and is urging Congress to use its power to kill it.

"Mr. Pollard's status was determined by the United States Parole Commission according to standard procedures, and the Parole Commission's decision was in no way linked to foreign policy considerations," Baskey said.

The Conference of Presidents of Major American Jewish Organizations, the umbrella foreign policy body for the community, in welcoming the paroled release announcement also emphasized that Iran was not a factor.

"We do not believe that there is any connection to the nuclear agreement with Iran," its statement said. "The parole date was set at the time of his sentencing and the current parole process preceded the negotiations with Iran."

Among those criticizing Pollard's release was Donald Rumsfeld, the former defense secretary, who on Tuesday revealed that he advised President George W. Bush to "forcefully" refuse Israeli entreaties to free Pollard.

Rumsfeld, Bush's defense secretary from 2001 to 2006, posted a letter on Twitter that he wrote to Bush in March 2001, ahead of a visit by Israeli officials early in Bush's presidency.

"It is possible that in the meeting you will be asked to take action to free Pollard," Rumsfeld wrote. "Any step to free Pollard would be enormously damaging to our efforts to keep spies out of government. My suggestion would be to come on very forcefully and say not no, but definitely no-no today, tomorrow and the next day, and that is not a matter that you would consider during your administration."

Rumsfeld, who was also defense secretary during the presidency of Gerald Ford in the mid-1970s, attached to his letter to Bush a 1998 letter he had drafted and co-signed with six other former defense secretaries-including Cheney, who served in the post during the George H. W. Bush presidency-urging President Bill Clinton not to accede to Israeli requests to free Pollard.