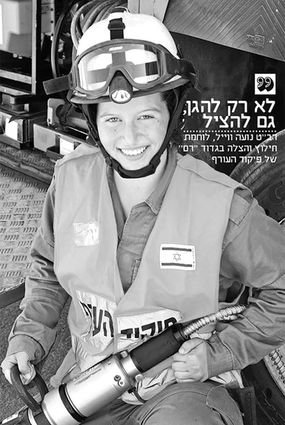 Noa Weil, daughter of Aaron and Sharon Weil, went to Israel a year ago to join the Israel Defense Forces. Recently, she was highlighted in the IDF magazine "B'Machaneh." The following article was written by magazine reporter Naama Bialer:

Meet Private Noa Weil, 19 years old from Kibbutz Magen, fighter in the Search and Rescue unit of the Home Front Command. She spoke with writer Naama Bialer about her life in the army.

About her daily routine: "Under the current security situation, we patrol, arrest and train- and maintain a state of combat readiness. In the event of a war, we are located mainly in the cities. We go through three months of basic training and three months of advanced training, where we learn everything about extracting survivors, as well as atomic, biological and chemical warfare."

In the spirit: "I believe someone has to stand in the cold and the heat and always keep alert. If I physically can do it, then I should do it too. In addition, I've made friends for life and experiences that cannot be had anywhere else in the army. It's special.

"Whoever chooses to be a Search and Rescue fighter will learn that fighting means 'protection' and learning to save lives. It's a very important mission-not only to protect, but also to save lives."

When off duty: "When I'm at home, I sit with friends, love to go out to Tel Aviv and rest."

Weil is in the states on leave until after Rosh Hashanah and spoke with the Heritage about her life as a "lone soldier." Why would a young college-aged woman want to become a soldier in the IDF?

"Eventually, I want to live here and I want to be equal to everyone else who is doing their part," she said. Serving in the Israeli Army is also a way to integrate into society and make good connections, she added. She plans to make aliyah when she completes her service.

Weil went to Israel in June 2014 and entered the service in November that same year. Even though she went to Israel knowing quite a bit of Hebrew, she had to grasp the language quickly. No English is spoken in the IDF.

"Now I almost sound like a real Israeli!" she said with a laugh.

Weil completed her training in May, and has two more years to serve because she chose to be in a combat unit, which was hard on her parents at first. However, she is not in the frontlines of combat. Her Search and Rescue unit is always in "standby readiness" to help rescue civilians or military personnel caught in bombed buildings or areas.

Weil is stationed at Bet Shenesh, about 20 minutes north of Kibbutz Magen, where she calls "home." Every other weekend she gets to go here for a bit of rest and relaxation-and the kibbutz is right on the border of Gaza.

"It is so beautiful there," she said without a bit of fear.

She is in good company with about 20 other people from the southeast U.S. who are in the same program and live in the house with her at the kibbutz. Ari Hoffman, a graduate of UCF and former president of UCF Knights for Israel (a support group for Israel on campus), is in the same program that Weil is in, so they see each other on occasion at the kibbutz. "He is doing very well," she told the Heritage and said she would tell him many people ask about him and wish him well.

This community also wishes Weil a safe and happy life as a future Israeli.

Christine DeSouza contributed to this article.