Save a fridge magnet for must-have Jewish calendar 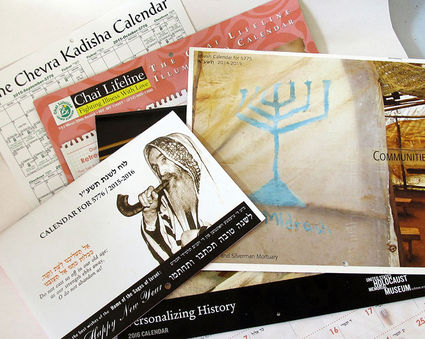 Jewish calendars help keep the community on the same page.

LOS ANGELES (JTA)-It's no miracle that I know the exact minute that Rosh Hashanah is coming; my trusty Jewish calendar hanging on the refrigerator tells me.

While it doesn't actually speak to me like my friend Marcy's Jewish calendar computer program, my old-fashioned paper version not only provides me the eve of when Rosh Hashanah begins, Sept. 13, and the precise moment, 6:44 p.m., but a lesson in klal Yisrael, literally "the whole of Israel."

And it's all for free.

Unlike the mezuzah, there is no Torah mandate saying you need a Jewish calendar in your home, but try living a Jewish existence without one. In addition to not knowing the date when someone texts you an invite to a party on the fifth night of Hanukkah (Dec. 20), how can you say "I love you" on Tu b'Av (kind of a Jewish Valentine's Day celebrated in 2016, that is 5776, on Aug. 19, the 15th of the Hebrew month of Av) if you don't know when it is?

Besides, you probably have discovered that the "regular" Gregorian calendars sometimes get the Jewish holidays wrong or omit them. Sometimes Hanukkah is reduced to one day; do they think it's Christmas?

If you've ever wondered why Jews always seem out of time, it could be that our calendar is a little off. A 12-month strictly lunar calendar, to adjust to the length of the solar year, is about 11 days shorter. To compensate, the Jewish calendar uses the lunar calendar with a month  added occasionally, standardized by Hillel II in the fourth century, in case anyone asks.

To the English-speaking ear, the names of the month sound different, too. Nisan, the month of Passover, was also used by the Babylonians and not coined by a Japanese automaker. Iyar, the month of Israel Independence Day and Lag b'Omer, is not named for a character created by A.A. Milne and also is Babylonian. Tishrei is Babylonian, too (fortunately there isn't a royalty), and is derived from an Acadian word meaning "beginning," which makes sense since in that month is Rosh Hashanah, which literally means "head of the year."

Yes, I know that Jewish calendars, especially the free ones you pick up in grocery stores and kosher markets in the weeks before Rosh Hashanah, can be kitschy, filled with dated photos of Israel, mothballed Judaica and my favorite, chicken recipes by the month.

But the calendar that I picked up for free at a cemetery where I was attending a funeral, called "Communities Far & Wide," provided me a trip round the Jewish world.

Saving on airfare, I visited the Jewish community of Mauritius in November, Greece in December (off-season), Norway in March, and in September, the Namutumba Synagogue in Uganda, the home of the Abayudaya, the "people of Judah-a community practicing full Jewish observance for close to a century."

The calendar that my friend Marcy had in her home this year took her on a different journey. Titled "Seeing the Beauty in Every Day," the calendar from Chai Lifeline was a connection to her daughter Daniela, who passed away a few years ago.

Chai Lifeline is a national organization that helps families "struggling with pediatric illness or loss," as its website says. Marcy's family experienced its services firsthand when their daughter, suffering from familial dysautonomia, a progressive neurogenetic disorder to which almost exclusively Ashkenazi Jews are susceptible, attended Camp Simcha in the hamlet of Glen Spey, New York. Each summer, according to the organization, 400 seriously ill children "are treated to an unforgettable, medically supervised overnight camp."

"She just loved the camp. It was the high point of her year," Marcy said.

The calendar, which Marcy receives because she donates to the organization, in addition to keeping her on top of the week's Torah reading and candle-lighting times, shares a little wisdom about the difficulty of making hospital visits to children "in so much pain." You "see the difference your visit makes, how you can make children smile and laugh again," the text says.

"We used to get five Jewish calendars in the mail. Now we're down to one or two," said Marcy, who attributes the decline to the growing popularity of Hebrew calendar programs like Hebcal, which she uses on her computer.

For me, the handiest Jewish calendar is the one published every year here by the Chevra Kadisha Mortuary. Printed on both sides of a long piece of cardboard, it has no travel pictures-but nonetheless connects you with a journey of some depth. "Cemeteries-Monuments-Caskets. Pre-need arrangements available," it says in bold type on the bottom.

Yet it helps with arrangements for the living, too. Free, and available at many kosher establishments around town, I usually grab a stack to hand out to friends and family. I rest easy knowing in the New Year we will all be on the same page.