What makes a mensch? A 'digital diva' wants to know 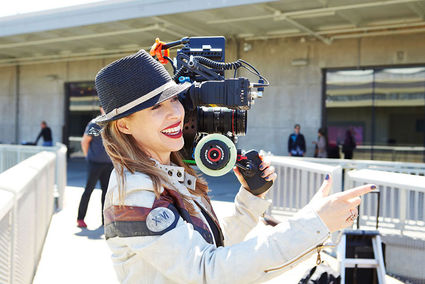 Tiffany Shlain has quietly become one of the most influential Jewish filmmakers in the country.

But filmmaker Tiffany Shlain-who utilizes an online, collaborative process and distribution method she dubs "cloud filmmaking"-says it's possible that technology, used correctly, can enhance our humanity.

As a testament to Shlain's methods, as well as her rise to becoming one of the most influential filmmakers in the American Jewish world, her latest film, "The Making of a Mensch," will be shown in more than 4,000 Jewish schools, synagogues and other organizations across the country during the High Holidays.

The film-about the Mussar movement, a lesser-known strain of Jewish ethical thought known for promoting character development-will be released on Sept. 18. Shlain's nonprofit film company Let It Ripple: Mobile Films for Global Change is offering the short to the organizations for free, along with materials meant to foster discussions about moral discipline and ethical exploration.

It's a pretty remarkable feat, considering that just a few years ago Shlain-who founded the Webby Awards, for excellence on the Internet-had never heard of Mussar, which is Hebrew for "moral conduct." Her new film, which has a run time of less than 15 minutes, coaches viewers on improving specific personality traits by combining Mussar teachings with strains of psychology, philosophy, social science and Jewish history.

"The High Holidays are a time of self-reflection ... on who you are, what you did last year and what you want to become," Shlain told JTA. "And Mussar is the perfect set of tools to help do that."

This is Shlain's second film that delves deeply into Jewish topics. Her first, 2006's "The Tribe," was inspired by an iconic 11 1/2-inch piece of plastic: the Barbie doll.

"I always thought it was such an irony that a Jewish woman created the ultimate shiksa with the Barbie doll," said Shlain, who identifies as "very culturally Jewish."

The short-which used Barbie and its founder, Ruth Handler, as an entry point into an exploration of American Jewish identity-played at the Sundance Film Festival and became the first documentary to top the iTunes film chart.

"'Making of a Mensch' is the next evolution of what I was wrestling with with 'The Tribe,'" Shlain told JTA in a phone interview. "'The Tribe' was about 'OK, I'm Jewish, what does that mean?' Ten years later, 'I'm Jewish, we celebrate Shabbat... but I want a deeper guide and meaning in this 24/7 world on living a good life and fulfilling it in my children.'"

Shlain, 45, lives in Mill Valley, California, just north of San Francisco, with her husband and two children. She grew up in northern California, the daughter of a neuroscientist and a psychologist, and loved film and technology from an early age. She actually predicted the potential of the Internet before its time-in 1988, at age 18, she wrote a proposal called "Uniting Nations in Telecommunications and Software" that caught the eye of California Sen. Barbara Boxer.

Through her work for The Web Magazine-a publication that Shlain says failed because it was way ahead of its time-in part because of  Shlain founded the Webby Awards in 1996. The awards became a success partly due to Shlain's quirky ideas, such as a five-word maximum for each award acceptance speech. San Francisco Mayor Willie Brown dubbed Shlain the "Digital Diva" of Silicon Valley.

But it wasn't until she met her husband, Ken Goldberg, that she got in touch with her Jewish side. Goldberg, a professor of robotics at the University of California, Berkeley, who now co-writes most of Shlain's films, took her to Israel for their honeymoon and introduced her to Shabbat observance-a Jewish ritual that would inspire Shlain in the years to come.

After attending the inaugural conference organized by Reboot (a Jewish nonprofit that "engages and inspires young, Jewishly unconnected cultural creatives," according to its website) in 2002 and making "The Tribe," Shlain started working on a feature documentary, "Connected," which explored technology's ways of connecting people. It was shown at the 2011 Sundance Film Festival.

While working on the film, Shlain watched her father, who had been diagnosed with brain cancer, deteriorate to the point of having only "one good hour a day." She resolved with her husband to turn off all of her family's screens each Saturday-what she termed a "technology Shabbat"-in order to greater appreciate their time together.

"Most people are surprised by it because I founded the Webby Awards," Shlain said. "But most of my work explores the good, the bad and the potential [of the Internet], all three of those things. Disconnecting one day a week every week has just been the most profound experience for me."

Shlain went on to make a short film about the "technology Shabbat," which was also the first episode of a web series called "The Future Starts Here," which she was commissioned to make for AOL. "Connected" and the subsequent "Brain Power" were included in the State Department's American Film Showcase, which showed the films at American embassies around the world.

Since "The Tribe," Shlain has also carved out a niche for herself in the Jewish community, which she says gravitated toward the film's distillation of complex ideas, and some Jewish educators and community leaders had been asking her for another "Jewish" film. Shlain credits her nonprofit with helping her reach out to Jewish institutions across the country without worrying about the profitability of her films.

"Establishing the nonprofit was a huge breakthrough as a filmmaker," Shlain said. "Rather than focusing so much energy on licensing fees and selling the films, foundations and grants could support giving the films away for free, and we could make so many more films and have them reach so many more people."

In producing "The Making of a Mensch," Shlain on her website requested video submissions from people around the world to provide a definition of a mensch. (She had asked a different question for a previous short, "The Science of Character.") Snippets from selected submissions will make their way into the final cut of the film, which Shlain is completing.

Shlain terms this collaborative process-along with releasing the film for free to maximize its reach and impact-"cloud filmmaking," a term that symbolizes how deeply her work is entwined with the power of the Internet.

"I like the word 'cloud' because, to me, a cloud sounds intimate, and it sounds like creativity," Shlain said.

"The exciting part for me is that I can be working on a script with three people at the same time or I can make a film with videos from people from all over the world. I cannot wait to share this."