Does Donald Trump know the difference between Hamas and Hezbollah? 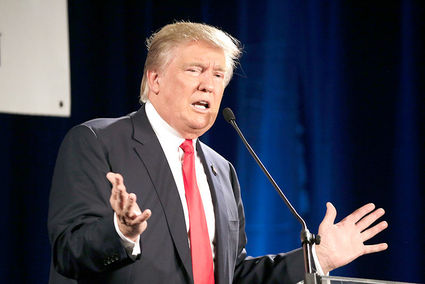 (JTA)-Donald Trump has called the Iran deal "terrible" in recent months. But in an interview on Sept. 3, the current Republican front-runner revealed some gaps in his knowledge of the Middle East.

Trump spoke with Hugh Hewitt, a popular conservative radio host, who asked the real estate mogul some "commander-in-chief questions" about the region.

When asked about the two militant groups, Trump said the difference between Hamas and Hezbollah does not matter to him yet.

"[The difference] will [matter] when it's appropriate," Trump said. "I will know more about it than you know, and believe me, it won't take long."

Hamas is a Palestinian Islamist organization based in the Gaza Strip. Hezbollah is a Shiite Islamist militant group and political party based in Lebanon. Both are avowedly committed to Israel's destruction.

Earlier in the interview, Trump confused the Quds force, an Iranian military group, with the Kurds, a Middle Eastern ethnic group. He thought Hewitt had implied that Gen. Qassim Suleimani, the head of the Quds force, was a Kurdish leader.

Next, Trump acknowledged not knowing who terrorist leaders Hassan Nasrallah of Hezbollah, Ayman al-Zawahiri of al-Qaida, Abu Mohammed al-Julani of al-Nusra Front or Abu Bakr al-Baghdadi of ISIS were.

"Do you know the players without a scorecard yet, Donald Trump?" Hewitt asked.

"No, you know, I'll tell you honestly, I think by the time we get to office, they'll all be changed... You know, those are like history questions. Do you know this one, do you know that one?" Trump said.

When elaborating on the Iran deal, Trump said that a clause of the nuclear agreement could force the United States, a steadfast ally of Israel, to attack the Jewish state and defend Iran.

"But do you know there's a clause there that in theory, we're supposed to help [Iran] fight Israel?" Trump said.

Earlier in the day, Trump signed a pledge vowing not to run as a third-party independent if he does not receive the Republican nomination for president.

In the meantime, it looks like he'll have to do some brushing up on his foreign policy facts.