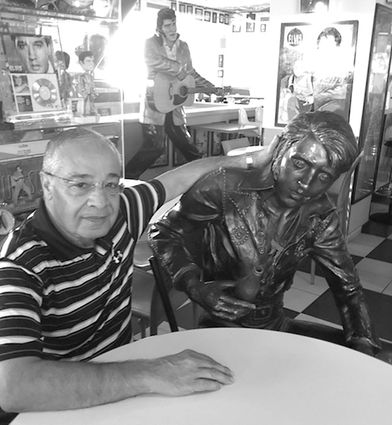 To appreciate how much Israelis love Elvis Presley, you just have to hear three generations of the Mizrachi family of Rehovot crooning, "Wise men say only fools rush in...but I can't help falling in love with you."

The Mizrachis-mom Aliza, sons Asaf and Yehoram, and granddaughter Kahila-had just downed some American-style burgers at the Elvis Inn, a restaurant, convenience store, and gas station that proudly claims to be the only Israeli institution devoted to The King. And they were busy inspecting the impressive Elvis memorabilia and chotchke collection on the premises.

Drivers passing through this corner of the hills surrounding Jerusalem often do a double-take from the car window when they spot not one, but two way-more-than-life-sized statues of Elvis. Unless, of course, they're among those who like the Mizrachis make a special pilgrimage to the Elvis Inn, located in the small hillside town of Neve Ilan.

Where else can Israelis hear all-Elvis, all-the-time piped into a 1950s-style diner while they feast on burgers and fries? Where else can they purchase an Elvis mini-alarm clock, a platter-sized "Elvis in Jerusalem" plate, or a postcard with Elvis wearing tefillin in front of the Western Wall? (The latter souvenir comes thanks to Photoshop, since The King was never in Israel-the closest he got was Germany, and there is no evidence that he ever wore tefillin.) Better yet, buy a cup of coffee for 15 shekels ($3.88) and you get the ceramic Elvis mug to take home as a souvenir.

But nothing of this Elvis sanctuary was in the picture when Uri Yoeli was a 12-year-old growing up in Jerusalem, the seventh generation of his family to do so. The year was 1958 and the Israeli pre-teen had a girlfriend who was a hardcore fan.

"She gave me a picture of a man and said it was someone named Elvis," he recalls. "The next week she gave me a small record-'One Night with You.'" Back then, his family owned one of just a handful of gramophones in all of Jerusalem, and being willing to repeatedly play the Elvis record instantly made Yoeli one of the most popular kids in the neighborhood.

"I didn't understand one word of English but I knew this was great music," he says nearly six decades later. So began a lifelong devotion to The King, punctuated with trips to Graceland (Elvis's Memphis shrine) and an impressive collection of Elvis memorabilia, much of it now on display at Israel's Elvis Inn. Even during his years of Israel Defense Forces service, Yoeli continued his Elvis fascination, slowly buying whatever posters and records he could get his hands on. In 1974, when he had the chance to open a gas station in Neve Ilan, he put a few of the Elvis pictures on the wall behind the cash register.

"That's when I saw people's reaction: 'Wow, Elvis!'" he says. Thus, the Elvis Inn was born.

Over the years, the venue has grown, adding to the two oversized statues-the brass one is a towering 16 feet high-and attracting not only Israelis, but plenty of Americans on vacation looking for some old-fashioned home cooking. (Note: any Elvis fans who keep kosher will have to pass on the food at the inn.)

Visitors can try to stump Yoeli on the details of Elvis's bio, but be warned that he's something of a maven on the subject and knows many of lyrics by heart. His personal favorite? "It's Now or Never."

Yoeli's son Amir has similar lyrical mastery of Elvis. For the last six years, the younger Yoeli has run the second Elvis Inn location, in Georgia-not the Georgia with the annual Elvis festival, but the one in the former Soviet Union.

"They love Elvis there, too," says the elder Yoeli.

When it comes to Elvis's sad ending-he died of an apparent overdose in 1977-Yoeli believes The King would be alive today, at age 80, "if someone had been close to him and helped him."

Yoeli was one Elvis fan who was not surprised to learn that Elvis had a Jewish great-grandmother (though some say great-great grandmother). This makes Elvis "grandmothered" in by Jewish law, as these ancestors were on the matrilineal side of the family.

"I always felt Elvis had a Jewish soul," Yoeli says. Indeed, two books on the subject, "Elvis and Gladys" by Elaine Dundy, and "Schmelvis" by Jonathan Goldstein and Max Wallace, trace signs of Elvis's Jewish identity, including necklaces he sported with a Chai (Hebrew for life) symbol and Star of David, as well as his generosity to several Jewish charities over the years.

Long-time Elvis Inn customer (15 years and counting) Chaim Yoni of Caesarea says he keeps coming back for the atmosphere.

"It's the old music we grew up with," says the 60-year-old native Israeli and high-tech professional. "Elvis was a symbol to us here, an American icon like McDonald's and Coca-Cola, a sign of the American dream."

"It's not me, but the fans who've made this place what it is today," says Yoeli, adding with pride that his establishment is "the only place in Israel where people get up and dance to rock-and-roll at 9 in the morning."

Yet of all the customers Yoeli has greeted over the years, one special guest has yet to come through the door: Elvis's only child, Lisa Marie Presley.