Life in Israel as a fighter pilot and high school principal 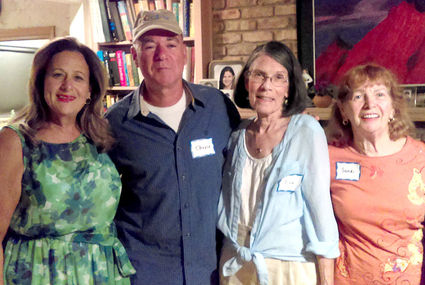 Shown here are (l-r) Judy Shujman, Col. Chezie Sagiv (wearing a Zionistas hat that was presented to him at the end of the evening), Eva London Ritt and Sandi Solomon.

Colonel Chezie Sagiv spoke softly to the intimate group of people who had gathered to hear what life is like in Israel for a distinguished IDF Air Force officer, pilot and senior Air Force instructor who also is a high level educator and high school principal.

He happened to be in Orlando for only two days to visit with his friend, Judy Shujman. "He took amazing care of my two children in Israel this summer and has known my brother, David, for over 20 years when he attended the Air Command and Staff College at Maxwell AFB in Montgomery, Ala.," said Shujman.

Sagiv's roots in Israel go back to the grandfather of his grandmother, who in 1882 came to Israel from East Russia and built the first neighborhood in Tel Aviv. He was also the first medical doctor in Tel Aviv. Sagiv was born in a kibbutz north of Haifa. As a child, his family moved to Arad, near Beersheva, where his father became the deputy mayor. He learned from his father to succeed in Israel, you have to be a leader.

Sagiv is a leader-both in the military and among the many students he has been privileged to work with.

What is it like to be a pilot in the IDF and high school principal at the same time? Even though Sagiv is retired, he still flies twice a week as an instructor. And he is always ready to go back into combat, should Israel come under attack again.

"It is very hard to one day be fighting [as he was in the Gaza conflict] and then go to the classroom the very next day," he said.

Sagiv fought in the 1982 Lebanon War and last summer, he spent 53 days in reserve and dodged 120 sorties during Operation Edge. He told us that for Israeli pilots to train in the planes, they have to sometimes fly out over the Mediterranean because Israel is too small for jet training. It only takes 15 minutes to fly the length of Israel. He has been in the United States often to train with American pilots. "We have a good relationship with the American military," he stated.

Sagiv has served as principal of four high schools. The first was in Caesarea, where he oversaw 1600 students and a staff of 237. Now he is the principal of a new high school in the hills of Judah at Tzur Hadassah. This position was like a gift to him and the school will have its first graduating class next year.

Sagiv had the opportunity to become a pilot for EL AL and was offered a larger salary than that of a high school principal. But he chose to work with young Israelis. "I have had the opportunity to serve my people [in the Air Force] and now as an educator even more," he said, explaining that these young Israelis will one day be the leaders of Israel. "One of my students will be prime minister," he added with confidence.

Sagiv exudes confidence without pride. He has a humble character that was hewn out by studying under the Dali Lama for three months in a small group. "I must try to be lower than my students," he explained. Under the Dali Lama's teaching, he and fellow student Richard Gere learned simplicity of life, have good values, be the best you can be, and have respect for all humans-"I believe all people in the world are equal," he stated. "Don't think of yourself as better than others. Stay centered and don't believe fanatics" are all part of his beliefs. He also strives for dialogue between people and practices what he believes. In every high school that he managed, Sagiv has hired Arab teachers to teach at his schools and has had a good response from both the teachers and the students. He attempted to have theater and music students from his school participate in a program with a high school in Bethlehem, which is all Arab. However too many Palestinian parents said they couldn't support a program like this because it would look like they were supporting Israel. The planned program failed.

But always optimistic, Sagiv stated, "you have to look ahead positively. Change the wrong approach and make leaders."

"Always try dialogue first," he said. "But if someone comes to kill you, kill him first."