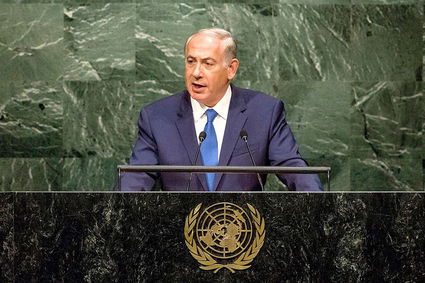 Prime Minister Benjamin Netanyahu addressed the 70th United Nations General Assembly (UNGA) Debate in the late morning of Oct. 1, 2015. Twitter accounts from inside the Debate Hall reported that the hall was packed in anticipation of Netanyahu before his address began, and the crowds greeted Netanyahu with a round of applause upon his assumption of the role at the speakers' podium, one of the only Heads of State to be greeted as such.

Netanyahu's address to UNGA was straightforward. As he said, "70 years after 6 million of our people were murdered, Iran has pledged ...to murder my people. And what is the response of this body [the UNGA] and nearly every government here [at the UNGA]?... Deafening silence." At this point the United Nations fell into silence for at least 44 seconds. Netanyahu forced the world to confront the dangers posed by Iran. Netanyahu continued, "I refuse to be silent. The days when Jews turn a passive face to genocidal enemies are over... We will defend ourselves," and as he continued, "Israel will not allow Iran to obtain nuclear weapons...The people of Israel live. Am Yisrael Chai." He did not elaborate what he had in mind when he said that Israel will not allow Iran to obtain nuclear weapons.

Netanyahu, immediately beginning his address with taking on the P5+1/Iran Nuclear Deal, asserted that the Agreement "makes war more likely." As a background Netanyahu outlined the international warmongering and terrorist activities carried out by Iran within the past six months, since the closing phase of the nuclear negotiation processes in Europe. These dangerous activities include supplying weapons and military support to support Bashar al-Assad in Syria and the Houthi rebels attempting to take over Yemen.

Iran additionally has threatened to topple the Jordanian government and has continued growing its proxy terror cells, threatening Israel and all the world, including a cell in Cyprus supplied by Iran with five tons of the explosive ammonium nitrate-all, as Netanyahu noted, within the six months prior to UNGA. Iran has carried out all of these activities of aggression while carrying on with the nuclear negotiations in Europe and while being perceived by the world, in theory, as a peaceful power. If Iran has done all of these things before the Deal's removal of the sanctions, as Netanyahu asked, what can they be expected to do following the removal of the sanctions and influx of funds and weapons pursuant to the Agreement? The apparent answer is that Iran will more intensely pursue terror, just as before, and threaten the rest of the world with nuclear military action.

As he said to a round of applause, "When bad behavior is rewarded, it only gets worse." The monetary influx from sanctions relief serves as a "reward" for the Iranians' nuclear weapons activities and continued blatant violation of international law.

Netanyahu's attention to the Israeli conflict with the Palestinians was overshadowed by his address of the Iran Deal. Regarding the Palestinian issue, Netanyahu clearly laid out his position and stated, to another round of limited applause, that he is ready and committed to both the idea of "two states for two peoples," as he said, and to returning to direct negotiations to that effect with the Palestinians "without any preconditions whatsoever."

In the aftermath of the speeches at the UN by both Abbas and Netanyahu, attacks by Palestinians against Jewish Israelis spiked. A Jewish couple was murdered near Itamar with responsibility claimed by Fatah, Abbas's group; an Israeli police officer was stoned in Jerusalem; a man and a 16-year-old girl were hit by gunfire in the Binyamin region; and repeated stone attacks on Jewish Israelis continued-all on Oct. 1 and 2, following the speeches at the UN. Abbas and the Palestinian leadership refuse to accept the responsibility for their own society and its murderous elements correlate with their assertion to self-determination necessitating the creation of an independent Palestinian State. Although the Palestinian leadership refuses to hold negotiations or to negatively address the terrorist attacks against Israelis, Netanyahu and the State of Israel, as expressed at UNGA, remain resolute to bring an end to the conflict.