Is it really a shock that one-third of Americans wouldn't hide Jews? 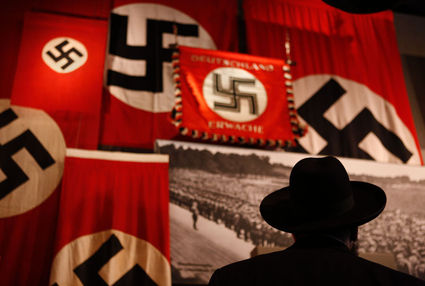 A man viewing an exhibit showing the Nazi flag during a tour of the Yad Vashem Holocaust memorial in Jerusalem, Jan. 26, 2007.

A poll commissioned by distributors of the Holocaust film "Return to the Hiding Place" asked 1,000 Americans a question many Jews have pondered: "If you were living during World War II, would you have risked the imprisonment and death of yourself and your family to hide Jews?"

The results, as reported in The Hollywood Reporter (and other publications that cited the Hollywood Reporter), were presented in a remarkably negative way: emphasizing the one-third of respondents who said "no" rather than the two-thirds majority who answered "yes."

This strikes me as odd. In most poll coverage, it's the majority that leads the news, not the minority. And in this case, what the majority said is noteworthy: They would risk their lives and those of their families to save Jews.

I find this impressive, even adjusted for the fact that saying you would do something heroic is a lot easier than actually doing something heroic. Had even one-third of Poles or Germans been willing to harbor Jews, Hitler's Final Solution might have been stopped.

By focusing on the one-third who would not hide Jews, the coverage implies surprise that a significant minority is unwilling to take a serious risk (not to mention assume a huge and potentially costly responsibility) to rescue a stranger.

Given how few countries and their citizens are willing to take in large numbers of Syrian refugees or impoverished immigrants, a relatively low-risk proposition, why is it surprising that many people are reluctant to take a step that could cost them everything?

Maybe I'm too skeptical of human nature, but I'm more impressed that a whopping two-thirds claim they would take that risk.

The slant of the coverage is not the only thing odd about this poll, which the Hollywood Reporter said the Barna Research firm conducted for the 2013 film's distributors as part of a publicity campaign for its digital release.

The poll appears nowhere on the official film website, nor does the film's Twitter handle mention it. Why launch a publicity campaign you don't even publicize yourself?

I emailed Spencer Productions, the company distributing the DVD, to confirm that it did in fact commission the poll and to request a copy (the poll, not the DVD). They have not yet responded.

In any event, the poll of 1,000 American adults, as described in the Hollywood Reporter, had some intriguing findings beyond the two-thirds to one-third headline.

The question read as follows: "Think back to World War II when Jews in Europe were forced into concentration camps and many were killed by the Nazis. If you were living in this time period, would you have risked the possible imprisonment and death of yourself and your family to hide Jews?"

The pollsters did not compare Jews to non-Jews because the sample size was too small to be statistically accurate.

Since my efforts to track down the poll have been unsuccessful, it's not clear to me how significant the differences were between these various demographics.

But it's fair to say that if you're seeking a safe haven, the best bet based on this poll is to knock on the door of a married Southern homosexual man.