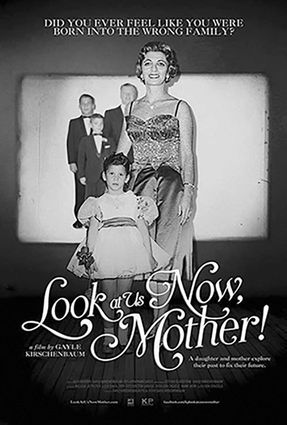 NEW YORK-Emmy award-winning filmmaker Gayle Kirschenbaum was driven to make her deeply personal documentary, "Look at Us Now, Mother!" (that premieres in downtown Orlando October 22nd at the Cobb Plaza Cinema Cafe as a part of the Orlando Film Festival) due to the overwhelming response and rave reviews of her humorous short "My Nose".

The film chronicles her own highly charged relationship with her mother and asks: what happens to a girl when she is born into a family that was expecting a boy? What drives a child to convince herself she is adopted?

With raw honesty and biting humor comes Kirschenbaum's fearless portrait of both her childhood, fraught with humiliation, and her adulthood scarred by its fallout. She invites us on her quest to understand, forgive and love her aging mother before it's too late. As these two formidable women travel down the bumpy road of discovery, their relationship changes before our eyes and teaches us a universal lesson: the power of forgiveness.

Kirschenbaum says, "Look at Us Now, Mother!" was the hardest and most important film I made. You'll understand why when you look at the trailer."

With an outreach campaign centered around healing and forgiveness between mothers and daughters, Kirschenbaum is bringing her film to communities worldwide to teach how forgiveness is possible even when most unlikely.

Gayle Kirschenbaum is also a TV producer/blogger and personality. She created several reality shows that premiered on TLC and Discovery Health, and co-created Judgment Day that aired on HBO. Kirschenbaum is a member of the Producer's Guild of America, New York Women in Film and Television, Film Fatales and is a judge for the Emmys. She currently blogs for the Huffington Post and has been featured widely in the media, including New York Times, NBC's Today Show, Miami Herald, Washington Post, and Ladies Home Journal.