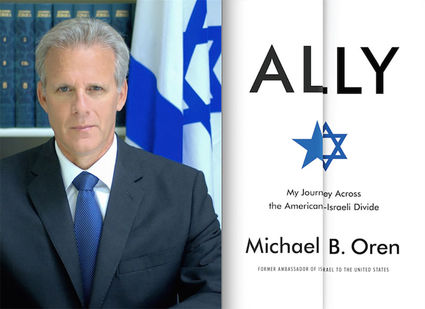 Michael Oren, author of Ally: My Journey Across the American-Israeli Divide.

Of course he didn't just wish it into being. He worked hard aiming at his goal. In his recently published book, "Ally: My Journey Across the American-Israeli Divide," Oren shares in this partly autobiographical-"Never before have I written in the first person, as a participant in history rather than a dispassionate observer of it," he states in the book's foreword-and partly recorded historical account about his journey from the Rabin handshake to the Residence, the Israeli ambassador's home in Washington, D.C.

At the end of his service, Oren visited his high school and spoke to the students. As a student, Oren starred in the role of Don Quixote in the high school production of "Man of La Mancha." "It's the story about a man who refused to give up on his principles. People called him outdated. People called him insane. Yet he kept wearing his rusty armor. He continued to fight," he told the high-schoolers. Oren is a great diplomat, but he is also a bit quirky. He started to sing "To Dream the Impossible Dream" and the students laughed and applauded. Then he told them, "I, too, had a dream. It was to move to Israel and then come back as Israel's ambassador to the United States. Each of you has your dreams as well. And just know that no dream is impossible."

Born Michael Bornstein (when he became an Israeli citizen he took the Hebrew name Oren), he grew up in West Orange, N.J. and lived an all-American life: Little League, pep rallies, high-school sweethearts. Even though he was a teenager during the politically turbulent 60s, he wasn't rebellious against America. He had a deep reverence for this country that was eventually shadowed by his love for another country-Israel.

He embraced Zionism. "Zionism enabled us to return to history as active authors of our own story," he wrote, and he saw himself, at that tender age of 15, needing to be a part of its unfolding pages in history.

To his surprise, Oren discovered that our founding fathers saw the need for the Jewish people to have their homeland restored and he wrote "Power, Faith, and Fantasy: America in the Middle East from 1776 to the Present" about America's involvement in the Middle East 200 years ago. In Oren himself, we can see that same American-Israeli relationship. Although he had to give up his American citizenship to become the ambassador, Oren is both American and Israeli in his heart, which enabled him to view both sides of these allies without prejudice.

One reason Ally is so fascinating is because Oren presents without bias events that unfolded throughout his term as ambassador. He studies those he worked with and gives his readers an inside view through his eyes of how President Obama, Secretary of State John Kerry, Prime Minister Netanyahu and many others accomplished or didn't accomplish difficult tasks.

Recently, Oren was in Miami for a book signing and Kenneth Bricker of The Israel Project was able to arrange an interview for The Heritage with Oren.

Since he left the ambassadorship in 2013, Oren has become involved in politics in Israel and is now a member of the Knesset in the Kulanu party.

Asked what his thoughts were of Pres. Obama pulling Secretary of State John Kerry and United Nations Ambassador Samantha Power from Prime Minister Netanyahu's speech at the UN General Assembly (which is what the media printed), he explained that it is not customary for the secretary of state to be present at UN speeches. However, he said, he was disappointed in Power for not being there and he wasn't sure she was called away by Obama. "I have great regard for Power and there was no reason for her not being there," he stated, adding that he wants to talk with her as to why she was not present. "It did send the wrong message, a regrettable message."

What does Oren think Obama has planned concerning Israel for the remainder of his term? Holding fast to his study of Obama when he first became ambassador, Oren stated in his book, "More than policy... Barack Obama was about ideology and a worldview often at variance with Israel's."

Obama is obsessed-and has been since 2008-with his "kishke" (gut) issues: Reconciling with Islam (which Obama calls the "Muslim world") and creating a Palestinian state.

In an article Oren wrote for foreignpolicy.com in June 2015, he said that Obama sees himself as the bridge between the Muslim world and the West. A self-described born-again Christian (Oren emphatically stated that Obama is not a Muslim), Obama fondly recalled that he has "known Islam on three continents," and steadfastly refuses to acknowledge terrorist activity by Islamic radicals. Despite the fact that every Islamic state except Iran has turned its back on Obama, he still believes himself to be that bridge to the point of the alienation of America's allies.

Will Obama support the Palestinians declaring themselves a state? "No," Oren answered, "Not formally because [if he did so] it would be in violation of the Oslo Accords."

What does Oren think about Russia now getting into the mix in the Middle East? "Diplomacy hates a vacuum. It is a complex relationship with Russia," he stated. "We have to keep the channels open with Putin and navigate carefully with Syria."

On a lighter note, in 2010 journalist Jeffery Goldberg did a profile on Oren's wife, Sally, who had an exciting life growing up in San Francisco. She was part of the Flower Children movement. Although wise enough not to experiment with drugs, she hung out with the likes of Jerry Garcia of the Grateful Dead, Jim Morrison, Janis Joplin, and the band Jefferson Airplane, who wrote two songs about her. On their third album, "After Bathing at Baxter's," the song "Young Girl Sunday Blues" is about Sally. Another song titled "Sally, Sally," was never recorded. She made aliyah with her family in 1980 and met Oren one year later.

"It's a balance," he said. "I'm a recorder of history, but I've taken part in some of it and possibly I've influences its course."

Does he see himself someday as Israel's prime minister? "That would be to dream too far!" he said. "It's also nightmarish because it's the hardest job in the world. I have respect and sympathy's for Prime Minister Netanyahu."

During his last month of service as ambassador, history repeated itself. Oren addressed a crowd of 15-year-old members of an American Zionist youth group. He began to talk but the group burst into the song "Heveinu Shalom Aleichem"-just as the group he'd been a part of did 45 years earlier. He didn't finish his not-really-even-started-speech but jumped off the stage and, "recalling that single shake that changed my life, I gratefully grasped them all."