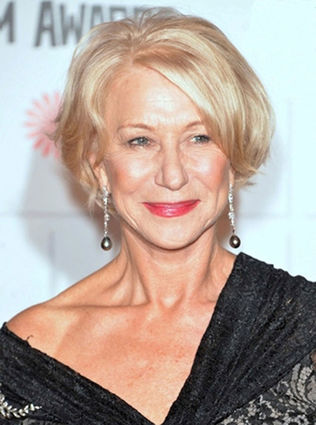 A great movie. A great actress...

"Academy Award winning actress Helen Mirren was honored by the WJC for helping to publicize the issue of Nazi-looted art through her portrayal of Maria Altman in the acclaimed film 'Woman In Gold.'

The movie tells the story of the Austrian-American woman who made headlines in 2006 for her winning legal battle against the Austrian government to reclaim five Gustav Klimt paintings, among them the famous Portrait of Adele Bloch-Bauer 1, nicknamed Woman In Gold. The painting was among the works stolen from their rightful owner, Adele's widower Ferdinand, in 1938.

'Being a part of this film and preserving Maria Altmann's legacy has been a truly exceptional experience from the start, ' said Helen Mirren. ' I am utterly moved to be receiving an award from the WJC , an organization that does such important work all over the globe in advocating for Jewish rights.'

The article in the WJC continues:

"The history of 'The Woman in Gold' painting exemplifies the immense suffering, painful loss and, for a prolonged period, the injustice that many Jews were subjected to during the 20th century.' said Lauder. 'Through this film, audiences can learn about the second half of the Nazi-looted art story; the postwar grab by governments and museums that willfully continued the Nazi theft, both by hiding the art from the rightful owners or their heirs and by fighting the victims in court to keep the artworks.

Thanks to Helen Mirren's stunning performance, the international public will learn about the World War II legacy, which still hasn't been addressed properly by many governments and museums.'

The WJC, which represents Jewish communities in more than 100 countries around the world, has played a pivotal role for decades in advocating for Holocaust-era restitution and has led the efforts for the return of Nazi-looted art.

I refer this time to a gal who is deserving of an Academy Award for volunteer service. Her name is BETH FINKELSTEIN.

Like many non-profits, the Jewish Pavilion is understaffed. The agency relies on its volunteers to help in the office with mailings and projects.

For the past six years, Beth Finkelstein has been coming into the Jewish Pavilion office once a week to assist.

Beth has an associates science degree in office administration, so she excels at the computer. She can develop spreadsheets, create mail messages, and type correspondence.

Beth knows how to work the phones and the copier, scan documents and more.

What's more, she has a warm and pleasant personality and gets along well with everyone.

(Does she get along with dogs too? If so, I really need her and I would be willing to provide a delicious lunch if I knew how to cook. But my cooking is as bad as my technical skills.)

Beth's familiarity with nonprofits makes her the ideal volunteer when someone is needed to man the telephones.

The Jewish Pavilion receives $750,000 a year in in-kind donations and some of them are secured by Beth.

The agency is so fortunate to have such a talented volunteer. (Pictured above is Beth with NORMA BALL stuffing a mailing for the Jewish Pavilion.)

So you think you can dance...

The recent JCC Program Guide for Adults said, "Do you love to dance? Love Israeli music?

"Come get the best of both. Learn how to dance and get some exercise with a friendly group of people.

The class is taught by the talented DEBBIE MEITIN.

The cost is $5 per class and free to JCC menbers.

I recently went to check out the beautiful, fairly new Publix Market on 17-92 in Winter Park. After entering the store, probably within the first 10 minutes, the assistant manager, D J PFEIFER, presented me with a beautiful bunch of flowers. He had heard that I was recently widowed and wanted to give me special treatment.

Also, while in the store, a young man named AARON was extremely helpful and then, if that wasn't wonderful enough, I bumped into one of the employees, BOB OLIVE, who was so special in my life and in the life of my deceased spouse. All this absolutely made my day!

Well, I'm into jazz and big band, but I know many of the readers do love rock 'n' roll, so you should know about this absolute legend coming to our area.

Legendary performer and songwriter with 50 years in the business, GARY US BONDS, is heading our way!

On Thursday, Oct. 29th at 7 p.m. he will wow his audiences with his superb talent.

The show takes place at the Mount Dora Community Building. Ticket prices range from $25 to $45.

This joke really got to me. I hope you enjoy it too:

Leah has three sons (like me) and as many Jewish mothers, she wants assurances that they are dating nice girls and are happy.

She doesn't want them led astray by the wrong kind of girls.

Two of her sons always discuss their girlfriends with her but the third son is always very secretive.

So, one day when he leaves the house, she sneaks into his room and checks all his pockets.

Aha! She finds a silver and gold make-up case and on it is written Helena Rubinstein.