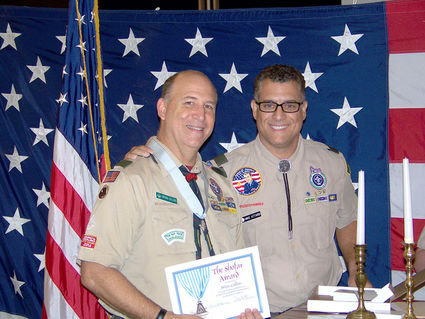 After serving as Boy Scout Troop 6's chaplain for the past seven years and being involved in many communitywide cross-cultural initiatives, Brian Collins of the Dr. Phillips community in Southwest Orlando, was presented the Shofar Award at the Court of Honor for Boy Scout Troop 6. Friend and fellow Scouter Michael Attardi (shown in the photo on the right), who nominated Collins, presented the medallion. Attardi is a former Troop 6 assistant Scoutmaster and is now with Troop 225.

The National Jewish Committee on Scouting established the Shofar Award to recognize outstanding service by adults in the promotion of Scouting among Jewish youth. This national award is highly prestigious and selective, with a long and arduous vetting process. Just as the Shofar (Ram's Horn) calls people to the service of God, so the Shofar Award is in recognition of the individual who has answered the call to serve Jewish youth in Scouting.

"Needless to say, I was very touched," stated Collins, who has been an adult leader with Troop 6, chartered by St. Luke's United Methodist Church, for the past nine years and has served as a commissioner in the Sand Lake District for more than four years.

In addition to being active within the Jewish community, Collins also is involved in many other cross-cultural initiatives such as organizing the first Islamic Cub Scout pack and Boy Scout troop within the District.