How Jerusalem is coping with the attacks: Police and pepper spray 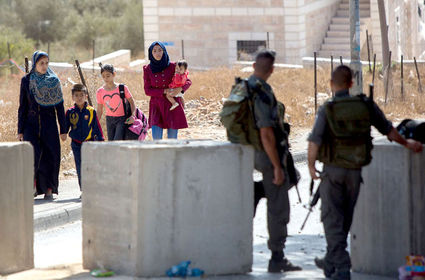 JERUSALEM (JTA)-"No pepper spray, no tear gas, no nightsticks," sighed Itzhak Mizrahi to three disappointed men, as if it were a mantra he'd recited dozens of times.

The glass-topped display case in Magnum, the central Jerusalem gun shop Mizrahi has owned for three decades, featured a wide variety of pistols last Thursday. The pepper spray compartment, however, was empty, stormed earlier in the week by nervous Israelis hoping to defend themselves from stabbing attacks.

The country is suffering a nationwide pepper-spray shortage, Mizrahi said. As the men left, Mizrahi told them he hoped to restock his tear gas supply early next week.

Jerusalem's streets and shops have been desolate for several days, and its atmosphere tense. A string of stabbings, shootings and car-ramming attacks in the city over the past two weeks have killed seven Israelis and paralyzed the city center, leading its residents to take measures to protect themselves. Many others are staying inside rather than risk getting knifed. In their place are security guards, checkpoints and police vans.

"There's a lot more stress everywhere," said Alexandra Benjamin, who immigrated from London to Jerusalem in 2002. "I'm refusing to allow myself to not go out, but I can't help noticing the streets are much, much quieter."

For Mizrahi, business is booming. He has sold about twice as many handguns as usual the past three weeks, and he applauds the government's recent decision to relax Israel's strict gun laws. Two weeks ago, Jerusalem Mayor Nir Barkat urged licensed gun owners to carry their weapons in the street, and was himself photographed toting a firearm.

"We take the guns not to attack, just to defend," said Mizrahi, a pistol lying by his hand.

Others have looked to more primitive tools to protect themselves. Last Thursday, a warm, sunny day, a man walked hurriedly past the central Zion Square holding an umbrella like a spear. A woman carrying shopping bags tucked a mop handle-sans mop-under her right arm. Last Tuesday, a man fought off a terrorist with a selfie stick.

Other Jerusalem residents have chosen to say home. Jaffa Street, the city's central thoroughfare, was almost empty last Thursday, as was the Ben Yehuda Street pedestrian mall. Standing outside his cell phone store, Yair Kouhara, 18, said he hadn't made a sale all morning. But having lived through the second intifada as a child, Kouhara said he was unfazed by the terror.

"We're here not doing anything all day," Kouhara said. "We grew up in this situation. We're used to it. It's always tense."

The Israeli deaths during the past weeks don't approach the death tolls of the suicide bombings that hit Jerusalem during the second intifada 15 years ago, in which hundreds died. Even so, some Jerusalem residents said this time is worse.

"If you were careful and you were lucky to live in the right place, you'd be fine," said Margalit Cohen, 39, referring to the violence that wracked the city from 2000-2005. "It doesn't feel like that now. Now, it really feels like anywhere you go, it could be there."

Benjamin, the British immigrant, no longer checks her phone constantly or wears heels, in case she needs to run. Some of her friends have taken self-defense classes, a step she said is a bit much.

"I just think it's part of this hysterical panic, and I don't want to be a part of that," she said. "Walking around with pepper spray-that's not the world I want to live in."

As the government has encouraged civilian vigilance, its own response has been military. Hundreds of soldiers and policeman were deployed across Jerusalem and stationed along main streets. A soldier holding a rifle guarded one of the city's light rail stops, while a police officer stood opposite him inside the train.

Security is especially intense inside Jerusalem's Old City. A metal detector was positioned at the Jaffa Gate and the usually bustling nearby market was lined with pairs of soldiers.

Arab residents of Jerusalem are also suffering from the tension. On the road to the Arab neighborhood of Silwan, soldiers sat behind a concrete block at a checkpoint, bags of chips scattered between their combat helmets. As a dusty red car approached, they stopped it for a few minutes of questioning.

"I'm scared they'll shoot me by mistake," said Samir Masri, 24, who had taxied to work from the eastern Jerusalem neighborhood of Wadi Joz, rather than walk. "People aren't going out. The security situation is terrible."

Israeli Jews and Arabs alike have tried to ease the stress with humor. One spoof of a self-defense video shows the victim conjuring a fireball with his bare hands to deter an attacker. The lone Arab occupant of a Tel Aviv apartment building became a viral sensation when he posted to Facebook a selfie with a notice inviting residents to discuss the security threat he supposedly represented. The photo was captioned: "I'm coming and I'll bring muffins!"

Self defense measures are largely copying mechanisms too, said Jerusalem shopkeeper Kesem Atedgi, 21. The city, he said, won't be secured by pepper spray.

"If someone comes at you with a knife, this won't stop him in any case," said Atedgi, referring to a can. "It's for a feeling of security."