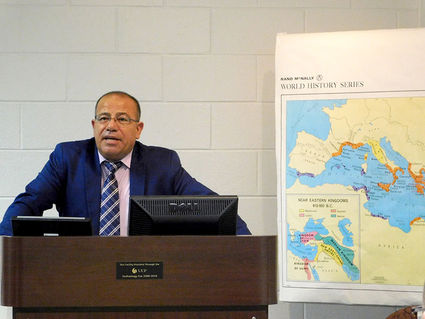 Palestinian human rights activist Bassem Eid addressed the nature of Palestinian society and conflict at the Oct. 19 event titled "Life Under the Palestinian Authority: A Palestinian Speaks Out," held at the University of Central Florida (UCF). Born in the Jordanian occupied Old City in East Jerusalem in 1958, he spent the first 33 years of his life in the Shuafat refugee camp and was a prominent figure of the First Intifada. He was arrested in 1995 by the Palestinian Presidential Guard for revealing human rights violations committed by the PA and ultimately founded the Palestinian Human Rights Monitoring Group (PHRMG).  Eid stated that he seeks to provide the information about what is really going on in Palestinian society and not to "provoke or influence."

He emphasized his point that the internal conflict in Palestinian society is much worse than any external conflict, a conflict of which the outside world only occasionally sees a glimpse. One characterization that Eid presented on the intensity of internal Palestinian conflict is that it as if the Palestinian leadership is pushing for not a two-state solution, but a "three state solution." The supposed three states represent the jurisdictions of Israel, the Palestinian Authority (PA) in Judea and Samaria, and Hamas in the Gaza Strip.

Such a description underscores the nature of the Palestinian Authorities, Hamas and the PA, as neglecting actual care for their population, the Palestinian people. As Eid noted, Hamas uses their own people to protect their missiles, and Fatah in Judea and Samaria causes all of the Palestinians under their care to suffer because of internal divisions and conflicts. There is little to no care for the typical person and his needs; as he related an example, Palestinian workers from an Israeli-owned SodaStream factory in Judea and Samaria displaced by the factory's relocation experienced their income drop from around $2000 a month to around $400 a month under the Palestinian Authority.

A main component of the event was the question and answer session following Eid's main presentation. The attendees asked a wide range of questions centering on the issues facing Palestinian society from the Iran Deal to the Basques and Kurds to the Israeli-Arab members of Israeli Parliament to the Temple Mount. Eid adeptly answered all of the questions, some more potentially confrontational than others, and overall he facilitated the opportunity for a highly beneficial perspective on the problems facing Palestinian society.

Legitimate human-centered perspectives covering the needs and status of individuals are so often lacking. As Eid noted, no one on the ground among the Palestinians is generally talking about a state or settlements; in other words, they are looking not for identity, but for "a kind of dignity." The priorities of the average Palestinian are a job, to survive, and to improve the education and health systems. "To improve the situation," Eid noted, "what is needed is a grasp of humanity, not politics, and to address the needs of humanity, not the needs of politicians."

Eid lamented the fact that those in the international community "talking about peace" in the Middle East function as "managers of conflict," as he called them. As he explained, it is in the interest of the United Nations to continue conflict, since their business, including salaries at upwards of $30,000 a month, necessitates the continuation of the problem. Outside of the United Nations, he feared that the future of the Israeli-Palestinian conflict is destined for nothing more than a push from election cycle to election cycle.

As the terror wave in Israel goes on, United States Secretary of State John Kerry is meeting with both Israel's Prime Minister Netanyahu and the Palestinian Authority's Mahmoud Abbas. The international community's perspective, though, Kerry included, continues to be focused on politics, on issues like the two-state solution, while ignoring all of the other, more pressing problems of human development in Palestinian society discussed by Eid. There is little, if any, action taken to improve the lives of the Palestinians in tangible and immediate terms; the only thing offered is an occasional speech or remark. The perspective of the international community has gotten the Middle East nowhere over the past decades of the conflict-in fact, the conflict has gotten worse. Even simply by default the perspective of Eid, centered on improving the human development of the Palestinians, holds much promise toward the resolution of the Israeli-Palestinian conflict.

A special thanks goes to Ben Suster and the Knights for Israel at UCF for helping to host the event, along with CAMERA, the Committee for Accuracy in Middle East Reporting in America. Eid was born and raised in Shuafat, East Jerusalem.