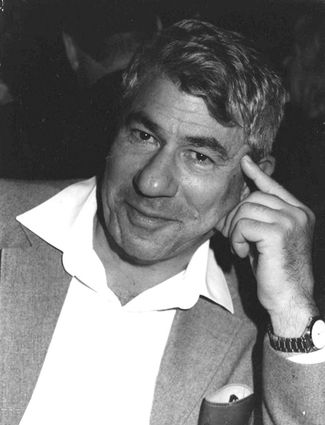 Dr. Norman Berdichevsky will be speaking on the topic of Hebrew vs. Yiddish on Wednesday, Nov. 18 at Southwest Orlando Jewish Congregation at 6:30 p.m., and at Temple Israel in Winter Springs on Sunday, Nov. 22 at 4 p.m. The community is invited to these events.

Visitors to Israel can scarcely appreciate the enormous difficulties that were involved in the restoration of Hebrew as a living language. The Hebrew-Yiddish conflict in Palestine took three generations to resolve. One hundred and thirty years ago, there were approximately six million Yiddish speaking Jews. No one then was a primary, habitual or native speaker of Hebrew. The battle to establish Hebrew as the national language of a future independent Jewish state would never have succeeded had it not won clear recognition as the only realistic candidate able to call upon the loyalty of Jews everywhere. Nevertheless, the argument was effectively made by Yiddishists that this meant a betrayal of a "living tongue" in favor of a "constructed", artificial language, that was not really anyone's mother tongue and unable to draw upon the wealth of Jewish folklore.

The Close Ties Between the Jewish "Hybrid Languages" and Hebrew

Although Hebrew ceased to be the spoken language of the majority of the Jews in their original Judean homeland between the second century B.C.E./B.C. and the second century C.E./A.D., it remained as the most important and prestigious language of religious observance and commentary and heavily influenced the "hybrid languages" such as Yiddish (Judeo-German), Ladino (or Judeo-Español), and several other varieties. These all still use the Hebrew alphabet. A parallel twin vocabulary also developed, in which words of Hebrew origin were used specifically to designate a concept, occupation, ceremony or item with Jewish content as opposed to the parallel word of foreign origin; emes vs. Warheit (truth), luakh vs. calendar (calendar), katsef vs. fleysh-haker (butcher), seyfer vs. bukh (book), levaye vs. bugrebnis (funeral), khokhme vs. Weisheit (wisdom). Many Hebrew words with a slightly different pronunciation and the accent put on an earlier syllable were absorbed by Yiddish to indicate specific religious beliefs and practices-Shabbos (the Sabbath), milchumah (war), mishpucha (family), koiyach (power), zichronos (memories), melamed (religious teacher), etc.

For a time, a lively rivalry existed between the two languages vying for the loyalty of several generations of literary figures, writers, playwrights, philosophers and political personalities. The largest Jewish party in Poland, the Bund, cultivated an autonomous Yiddish culture and until the late 1940s, the vast majority of Jewish immigrants to Palestine were native Yiddish speakers. On the eve of World War II, there were dozens of Yiddish newspapers in a score of countries and the Zionist movements carried on considerable propaganda in Yiddish.

Hebrew's growth was greatly aided by the increasingly difficult situation of the Jewish minorities in all the states of Eastern Europe and the rise of anti-Semitism in Germany. Territorial concentration of Jewish emigrants in the 1920s and 1930s, many of them enthusiastic Zionists, learned Hebrew in Europe, and were able to demonstrate their ability to speak the language proficiently and counter the Yiddishist arguments that it was an 'artificial language."

Many individuals who possessed a love of both languages experienced a soul-wrenching dilemma over the necessity of "choosing sides" in the increasingly polarized atmosphere of the new society being built. For many committed Zionists, even those who grew up with Yiddish as their first language, there was a conscious identification of Yiddish with the ghetto experience and humiliations of Eastern Europe.

For centuries, Hebrew had been used as a means of communication between educated Jews travelling abroad where the native languages were unintelligible in the Middle Ages. Sephardi Jews (living in Spain and Portugal) maintained a wide net of commercial contacts in an alliance of merchants. This link connected trade stations across the Mediterranean, the Sahara and the Abbasid and Byzantine Empires and beyond through a kind of secular-commercial Hebrew.

The pioneer work of Eliezer Ben-Yehuda to make Hebrew a spoken language had its initial impact in Eastern Europe and then Palestine in the late 19th century. He drew upon the pioneering work of many advocates of the Haskalah (Enlightenment) across much of Europe who had written essays and literary works in a refined classical Hebrew.

Ben-Yehuda's efforts were looked upon as eccentric or regarded as impossible by most Jews with any amount of secular education living in Palestine and the Diaspora and as wholly unrealistic.  In Herzl's  romantic novel "Altneuland" Jews were pictured as cosmopolitan multi-linguists with knowledge of German, French, English and Russian. At the first Zionist congresses Herzl asked the rhetorical question, "Who among us can as much as ask for a train ticket in Hebrew?"  It is likely that among those present in the audience, only a handful were aware that the Hebrew word for "train" had just recently been coined.

Nevertheless, Israel has succeeded in reviving the language and making it the dynamic vernacular of millions of Israelis (including more than a million Arabs) and linking the fortunes of the new state to an ancient historic past more than three thousand years old, quite likely the most ancient language and literature of any ethnic group and historic civilization.

The Yiddish Claim as the Authentic Mame Loshen (Mother Tongue)

Yiddish partisans proclaimed that a distinctly secular Modern Hebrew vernacular was a desecration of the "Holy Tongue" and that only the "Mame Loshen" could create a proper social environment which might be recreated and relocated to Palestine. Several generations of great writers, poets and playwrights had won international recognition and would never feel at home in the Middle East far removed from their familiar European environments.

It became increasingly clear after Israel's independence in 1948 that the arrival of massive waves of new immigrants from the countries of North Africa and the Middle East justified the decision that only Hebrew in its modern version. Many already had a basic knowledge of Biblical Hebrew due to their religious training and the transition from Arabic was much easier than for the European immigrants. Hebrew and Arabic share many grammatical similarities and a related vocabulary of many closely related words.

The language debate continued for two generations and reached the level of social ostracism, picket lines against Yiddish theater, polemical literature and boycotts of the rivals. In the years of mass immigration in the early 1950s, the number of native Yiddish speakers surpassed those fluent in Hebrew and state officials as well as the Zionist movement took a harsh, discriminatory and vengeful policy against the use of Yiddish in the press and theater.

In January, 1951, The Council for the Criticism of Films and Plays, a government agency issued its first directive banning presentation of a play in Yiddish in Tel-Aviv and threatened fines for the actors. The Yiddish newspaper, Letzte Nayes, was only allotted very limited access to the government's control of the supply of paper and the editors had to resort to the black market where the only paper obtained was yellow, green and red.  Fortunately, supporters of the two languages have since reconciled and Israel has issued several postage stamps honoring both Yiddish and Ladino.

Dr. Norman Berdichevsky is an author, freelance writer, editor, researcher and lecturer of history and culture. He is formerly a lecturer of Judaic studies at the University of Central Florida and the San Pedro Center, Winter Park. He lives in Orlando, Fla.