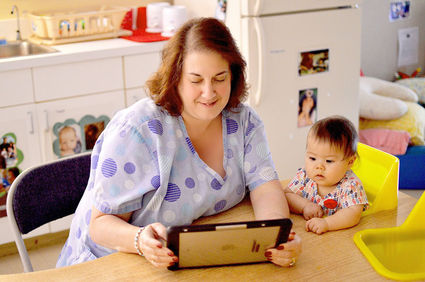 Infant teacher, Donna Sermons, sends a quick update on the classroom iPad to baby Elizabeth's parents through the new Life Cubby app. The app has enabled teachers and parents to easily stay on the same page about each child's development on a day-to-day basis.

Now parents and teachers of infants at The Roth Family JCC of Greater Orlando are working as a team throughout each weekday, thanks to a new app.

Life Cubby is an app that allows teachers to provide parents with information about their child's day-everything from meals to naps to bottles to medications to diaper changes. It's a simple and new way to electronically chronicle all aspects of a child's life. The app also allows parents to provide helpful details in order to make transitions to school seamless.

Currently, the school's three infant rooms have begun utilizing the app, and next semester, the six toddler rooms will begin as well. Ultimately, the JCC plans to roll out Life Cubby in all of the preschool's rooms.

"Now that our Life Cubby app is fully up and running, we have embraced it and our parents have as well," said Carol McNally, the early childhood director. "It is a fast, easy way to track each child's day and communicate with the parents. The parents are able to check in on their child's progress throughout the day."

The response from the school's tech-savvy parents has been overwhelmingly positive. While the JCC has always excelled at parent communications, this new app has allowed the school to bring the parent experience to a whole new level.

"We no longer have to worry if we forgot the paper with her last bottle time on it," said Rachel Sherwin, whose daughter is enrolled in an infant room. "Now, we can simply log on and get that information from our computer or even our phones if we need it."

Sherwin also explained that because the system generates daily schedules for the infants, filling in a babysitter she's hired has become much easier.

"I'll check the app when I leave work and notice my daughter didn't take very long naps, so I'll call my husband, and we'll make plans for an early dinner and bedtime. The app really helps me feel connected."

Laura Maitland, a team supervisor for the older preschool children, utilizes the app as a user, as she also has an infant enrolled at the JCC.

"As a parent of an infant, it is sometimes hard emotionally to be apart from your little one for the day. Life Cubby makes the time away easier because one click away is a detailed report on how he is doing."

Parents interested in snagging a spot for 2016-2017 in the Dick & Dottie Appelbaum Infant-Toddler Center, or in any of the JCC's preschool rooms, should mark their calendars for Thursday, Feb. 11 at 8 a.m., when the JCC will begin accepting applications. The JCC was able to purchase the LifeCubby system thanks to the generosity of The Rita & Jeff Adler Family.