At Reform biennial, focus on social justice and tradition 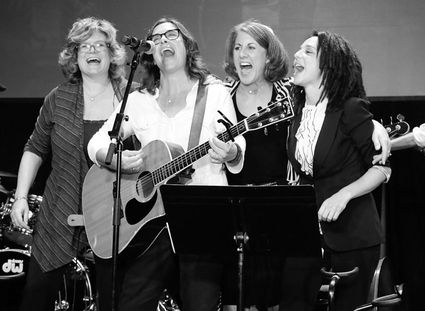 Shown here (l-r): Beth Schafer, Julie Silver, Peri Smilow and Michelle Citrin singing "If I Had a Hammer" at the Union for Reform Judaism biennial conference in Orlando, Fla., Nov. 6, 2015.

But after obtaining ordination a few years ago from a little-known rabbinical institute in suburban New York, Cubell decided to make her home in the Reform movement. First she got a job as the leader of the Reform Temple Beth Shira in Boca Raton, Florida, and more recently she launched her own start-up congregation in Boca, Beit Kulam, Hebrew for House of Everyone.

"Reform's the way to go because I believe in pluralism," Cubell told JTA in an interview at the biennial conference of the Union for Reform Judaism, which took place here Nov. 4-8.

"I like what the movement has to offer. They're more welcoming, and I think you should be welcoming. I think the Conservative movement is too stuck on rituals," Cubell said. "You should just be Jewish and practice the way you want."

Cubell was among the 5,000 or so participants at the Reform conference, which was as much a pep rally and celebration of Reform Judaism as it was a place for Jews to learn, network and strategize about improving their congregations and Reform Jewish life.

Highlights included a Saturday evening address by Vice President Joe Biden and the passage of a groundbreaking resolution embracing transgender rights. Among the steps the movement endorsed were transgender cultural training for religious school staff, gender-neutral restrooms where possible and sermons on transgender issues.

"We can create a 21st-century Reform Judaism that is inclusive, adaptable and thriving," said Daryl Messinger of Palo Alto, California, the new chair of the union's board of trustees and the first woman ever to hold Reform Judaism's top lay post.

For many participants, however, the real highlight came not from the well-produced onstage presentations, many of which focused on social justice issues, but from the excitement of being with thousands of other Reform Jews, connecting with old friends, and choosing from a rich tapestry of sessions and religious services.

"This is a big, liberal Jewish conference with tons of amazing things; it's great," raved one attendee, Lee Epstein, a first-year student at the Conservative movement's Ziegler School of Rabbinic Studies in Los Angeles.

"Just because the conference is based in another denomination is not a reason not to come," Epstein said. "As someone studying to become a rabbi in America, being here allows me not only to build relationships with people out there but also to learn. Only good can come of it."

Epstein, who is saying the Kaddish memorial prayer for his late father, organized an impromptu afternoon service in a hallway at the biennial, drawing some curious onlookers. While such a service might have been unthinkable at a Reform conference a generation ago, these days many Reform Jews are embracing elements of tradition.

"Today, we Reform Jews are no longer allergic to everything in traditional Judaism," Rabbi Rick Jacobs, president of the Union for Reform Judaism, said in his Nov. 5 keynote address, which was devoted largely to bolstering "tikkun olam," or "repairing the world," as a gateway to Reform Judaism.

"We can and should reinterpret what prayer, kashrut and Shabbat are, how Jewish study and practice can be the underpinning to a life of tikkun olam," Jacobs said. "They can give us the balance and strength to labor daily to do justice in our time."

Some attendees at the biennial wore tzitzit ritual fringes under their shirts, and many men and women sported yarmulkes. When it came to worship, the conference offered a wide variety of choices.

On the second day of the conference, the options for the evening prayer service included an experimental contemporary service led by Rabbi Judy Schindler, daughter of the late Reform leader Alexander Schindler; a choir-led Classical Reform service; and a theater-style service with song, poetry and a dramatic reading by actors from the 1997 best-seller "Tuesdays with Morrie" by Mitch Albom. As is common in the Reform movement, music was a centerpiece of all three services.

While a few moments generated headlines-the transgender resolution, the applause for Biden when he criticized Israeli settlements, Jacobs' call on Diaspora Jews not to support the "misguided policies" of Israeli leaders, philanthropist Charles Bronfman's call for Reform to outdo Chabad when it comes to organizing Birthright Israel trips-much of the conference was devoted to the four subject areas prioritized by URJ organizers: strengthening congregations, "audacious hospitality," tikkun olam and Jewish study.

At one of many sessions devoted to audacious hospitality-a Jacobs buzzword that he has made a centerpiece of his presidency-conference goers enacted and then deconstructed different ways to greet entrants to the synagogue. Among the takeaways from the session, which was led by a professional actress and Jewish educator, Cantor Rebecca Joy Fletcher: Don't make "in" jokes during synagogue announcements, devise ways to steer clear of being cliquey at Shabbat oneg events, ask newcomers if they would like to be seated with someone and don't overdo it if a newcomer wants to be left alone.

"Think about the principles of how Abraham welcomed his guests," Fletcher said. "The first think Abraham does is look, see and discern. If you ask them a question, wait for their answer." 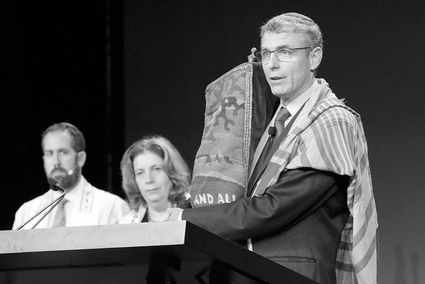 In a well-attended session on the union's new model for congregational dues, Reform leaders earned mostly high praise for simplifying and reducing the fees that congregations must pay to be URJ members. The new model-4 percent of a congregation's adjusted operating revenue, with a few exclusions and readjustments every two years-will reduce the URJ's congregational revenue by $1.5 million. Under the old model, which was based on a congregation's expenses and membership, the URJ took in $22 million from congregations last year, down from $35 million in 2008, before the financial crisis hit. At present, more than 40 percent of the URJ's 860 or so member congregations receive some form of dues assistance.

In his keynote speech, Jacobs said the movement isn't interested in just keeping the lights on, but in doing something of ultimate significance.

"We believe that we were put on this earth not to take up space or punch the time clock of our years, but rather to move our people and our world closer to the redeemed world envisioned by our prophets-a world of justice, compassion and wholeness," Jacobs said. "For us, being religious is not about being dogmatic, intolerant or unchanging. It's about living a life of depth and commitment. It shapes who we are and leads us to build just communities, which in turn shape a more just, compassionate and whole world."

The next Reform biennial will be held in 2017 in Boston.