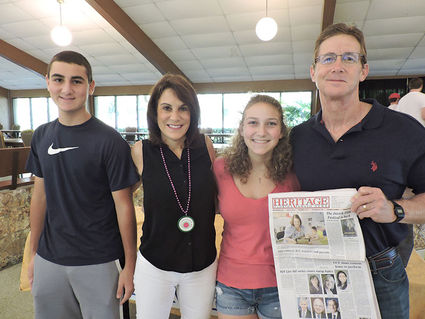 Marci and Jeff Gaeser turned the "Taste" into a family affair, and enjoyed the afternoon with their teens, Tyler and Haley.

"Today's A Taste in the Park and multi-generational festival more than lived up to its name, and exceeded all our expectations by bringing every generation to the table on behalf of the elder community," stated Jewish Pavilion Executive Director Nancy Ludin. More than 400 participants of all ages stepped up to the plate, munching happily on samplings from dozens of restaurants while visiting with friends and neighbors of all ages at the Pavilion-sponsored tasting event. The "Taste" took place on Sunday, Nov. 8 at the Maitland Civic Center-Venue on the Lake, with all proceeds enriching the lives of seniors in elder-care. Ludin added, "We did not know what to anticipate at our first tasting event, and our response from the community has been overwhelmingly positive. Our success can be attributed to the hard work of our taste committee, and the generosity of our sponsors, participating restaurants and vendors."

The Taste engaged every age group, with the teen-aged volunteers from Lake Brantley High School's Honor Society donating their time to help with set up in the early morning hours before the event. The youngest Taste participants had a ball shooting hoops at the Kid's Zone sponsored by Vitas Healthcare and Bluestone Physician's Group as well as playing pinball with Oviedo's Pinball Lounge. Additional kicks were provided by Orlando City Soccer, who donated an inflatable soccer goal along with a video game truck. Thanks to Cake Artist, Yael Miller and her daughter Danny, children and grown-ups alike learned to decorate cupcakes like a pro, with a series of lessons offered throughout the afternoon. Over 100 vendors and entertainers, including singers Penny D'agostino and her brother, Walter Goldstein, of Sky's the Limit Music, captivated crowds with fare for the whole family. The Children's Choir from the Jewish Academy of Orlando sang their hearts out at a Pavilion event for the fifth year in a row.

While the kids enjoyed clowning around with face-painter, Cookie Meyers, and professional clown, Shirley Michaels, their parents and grandparents shopped the Pavilion's vendors, and sampled foods ranging from quinoa to kugel. Crowd favorites were the "Swamp Salsa" from John and Shirley's Catering, an avocado bar supplied by Arthur's Catering, and fruit and yogurt parfaits and crepes featured from First Watch. Artisanal fare was served up by Heather McPherson, book author and food editor of the Orlando Sentinel, and Katie Farmand, author and editor of Edibles Orlando who showcased their latest cookbook, "Good Catch: Recipes and Stories Celebrating the best of Florida's Waters." 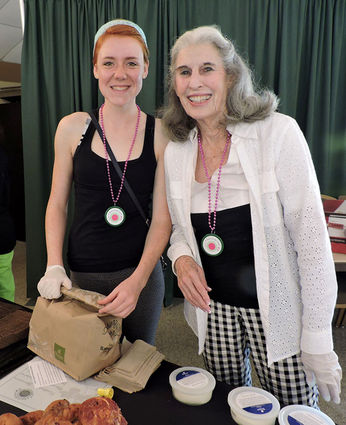 The Jewish Pavilion provided "A Taste of Home" along with a taste of kugel, thanks to Chef Nathan Shifflett of Horizon Bay, who showcased the traditional foods the Pavilion serves up to its seniors. Joff Stride of Brookdale, Island Lake served up another cultural favorite, lox and bagels, to the awaiting guests. Ben's Bake Shop dished out hundreds of pieces of fresh baked challah, and Bagel King and Panera Bread carb-loaded the crowds with a buffet of bagels, pastries, and chocolate treats.

Memorial Sponsors, Jane Edelstein and Carol Stein became "Place-Setters," honoring their late parents, Fanny Edelstein and Daniel and Betty Stein, respectively. Dozens of community members followed suit and honored or memorialized their loved ones by purchasing a plate certificate in their honor.

Elise Schilowitz, president of the Pavilion Board of Directors, stated, "A Taste in the Park was a wonderful family event, and a great example of how the Jewish Pavilion has been bringing the generations together for over a decade."

Nancy Ludin concluded, "The best part of the 'Taste' was that this family activity, full of food and fun, also provided a sense of fulfillment-with all funds raised going to the seniors we serve in elder care."