Sesame Street's lessons for the Jews: Dr. Lewis Bernstein at the Dali Museum 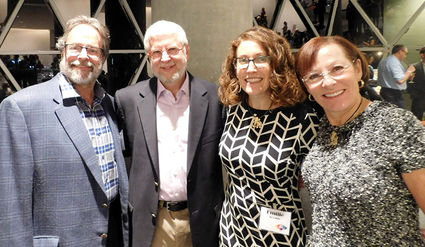 Nov. 10, 2015, was the 46th anniversary of the launch of the children's television program "Sesame Street" back in 1969. The Jewish Community's Dr. Lewis Bernstein worked on both the original American version and the Israeli-Palestinian versions of the show for many years. On Nov. 4, the Jewish Federation of Pinellas and Pasco Counties, Florida, hosted Bernstein as guest speaker for their 2016 Campaign Launch Party, "The Art of Giving," held at the Salvador Dali Museum in St. Petersburg, Florida.

Bernstein's five points cover the span of positive productivity in social work, and they begin with "invest in the early years" and "engage the family." "Sesame Street" has proven, as Bernstein shared, that thoughtful and positive attention to the very young, such as never "talking down" to children, is exceptionally beneficial. Young children are impressionable and should be shown respect, both in their own needs and in direction recognizing the needs of others. The Jewish Community has such a tradition intact since the imperative for education for young children in Eastern Europe's shtetls.

Although young children must be respected as individuals, they are not entirely independent. Therefore, Bernstein additionally shared the importance of engaging the whole family, not just the child. As he said, "If you miss adults, you miss the whole thing." Adults are a constant for the child's life, while the television is not-eventually, it goes off. The Jewish Community has such an imperative intact at this point as well as the first, as for generations the family unit as a whole has been engaged together in the religious and cultural environment of Judaism.

Bernstein's third and fourth points in which Jews can learn from "Sesame Street" are to "recognize and act when there is a paradigm shift," and to understand that "distribution is a prerequisite to impact." As he related, "The only constant in life is change," and the correlate proper response is to, as he put it, "Let My People Know." On the first point, the Jewish Community's relevant emphasis on knowledge and understanding is strong. Chapter 4, Verse 6 of Hosea in the Tanakh says, "My people are destroyed for a lack of knowledge," and such a striking statement drives the quest for knowledge that covers the Jewish Community. The second part of the third point, appropriate action, must not be forgotten in the quest for knowledge. Movements attempting to restore the proper balance between the two are repetitive throughout Jewish history, from Chassidism to Reform Judaism.

As an example of understanding that "distribution is a prerequisite to impact," Bernstein shared the story of the TV production's cooperation with the United States military. "Sesame Street" produced episodes designed for the children of military families to help explain first deployment, and then injury, and finally death of a military parent. These episodes were a significant help for military children correlate to their reach. There must be an active endeavor to find and accommodate the people who need the services being offered- in Bernstein's case, the children of military families.

Craig Sher, who delivered the "Invitation to Participate" in giving to the Pinellas and Pasco Counties Jewish Federation at "The Art of Giving," elaborated similar sentiments, stating that there is an obligation to find Jews in need. These Jews in need include the shut-ins, the homeless, the hungry, and the poor, and Sher related that such Jews are widely distributed but simply cared for and known little.

Bernstein related the power of "Sesame Street's sensibility" in his fifth point. This sensibility stands for quality in content, a quality that extends beyond facts to emotional skills and an understanding of the complexity of human development. Illustrating proper sensibility and tying together his five points and the Jewish Community, Bernstein told the story of the definition of a good Jew from Rabbi Menachem Mendel of Kotsk. One day, as the story goes, one of the Rabbi's students asked him who was a good Jew, and the Rabbi answered, "A good Jew is one who wants to be a good Jew." The student was confused and asked, "But, Rabbi- who wouldn't want to be a good Jew?" The Rabbi answered, "One who thinks they are a good Jew already." The lesson from Sesame Street is that the way for a children's television program, the Jewish Community, and every individual to be effective in life is to focus on relationship and human development as continuous first priority.