The power of Mahjong in giving 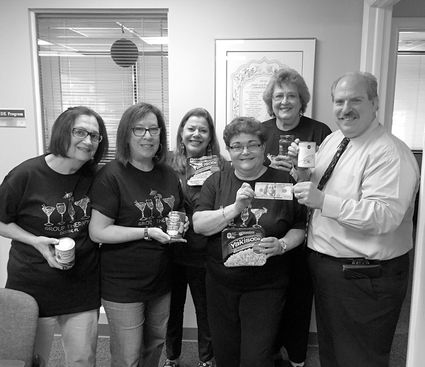 No cracks, bams or dots about it. And no jokers here! Running into a wall... or wall game... was never so much fun!

For nearly two years, a group of Orlando women have been playing mahjong and saving their "wall" winnings. For those that are not familiar, a "wall" game basically is a winner-less game. The group, composed of Es Cohen, Dolores Indek, Judy Kahan, Lila Tinkoff and Linda Wallerstein made a decision that each player would contribute a quarter each time there was a wall game, with the idea that at a certain point in time, the group would do something special with the money that had been collected.

Fast forward to most recently, the quarters, dimes and nickels were counted and the monies totaled slightly more than $100. The group discussed what they wanted to do with the winnings. In the group's mind, the most important factor was to make the donation to an agency where it could have the most impact.

Jewish Family Services, and its Pearlman Food Pantry, was the selected organization because at one point or another, all five women had a connection to JFS, whether through volunteering, as an administrator at a "sister" agency, or as a former staff member. It was the perfect choice.

"From my days at working at JFS, I remembered that every $1 donated had the power to purchase $6 of food. Where else can you have such an opportunity to enhance the gift we were providing?" stated Cohen.

The ladies posed this challenge to the other local mahjong groups; join us in the fight to help feed those less fortunate in our community.

At JFS, the Pearlman Food Pantry provides food for more than 76,000 meals on an annual basis. Unfortunately, "food insecurity," where families sometimes go hungry and don't know where their next meal is coming from, is a critical problem in our community. JFS witnesses this on a daily basis, and at various times needs support to help fill the shelves with food.

Thanksgiving and the holidays are quickly approaching and the pantry will bear the stress of keeping up with the requests for food. Non-perishable items such as tuna fish, peanut butter, soups, veggies are all needed.

For more information regarding the Pearlman Food Pantry or other JFS needs, contact Mary Lee Walker at 407-644-7593.

This article was submitted by Es Cohen.