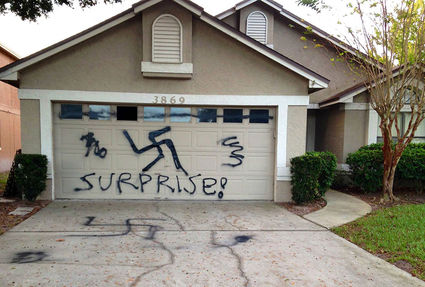 The garage door and driveway of David and Debra House was spray painted with a swastika Tuesday, Nov. 10.

It has happened again-anti-Semitic vandalism in Central Florida. The first occurrence was in Oviedo where an Israeli flag displayed in the front yard was desecrated with red paint. This time someone spray painted a swastika and the word "Surprise" on the garage door and driveway of the home of David and Debra House in the Autumn Glen subdivision in the Winter Park/Tuscawilla area.

The House family, who are members of Temple Shir Shalom (as is the Oviedo resident), first noticed the vandalism as they left for work Tuesday morning, Nov. 10. They called the Seminole County Police as well as news stations. However, they did not allow news cameras to video them or say their name on television because they don't want anything to interfere with the police investigation. David stated that he did not think this was a random act. He believes they were targeted because his wife and child are Jewish.

Judy Procell, a neighbor of the victims, said "To think the anti-Semitism is in our neighbor's yard is unexcusable." She stated on Channel 13 News and Fox 35 that she hopes people will see this as a call to action. "Be aware... Stand up for your community."

Cantor Kim Singer of Temple Shir Shalom, said many members of the congregation are frustrated about this. She told the Orlando Sentinel that she is cautious about labeling it anti-Jewish.

"It's hate, and hate directed against anybody in our community is not acceptable," she told the Sentinel.

A press released signed by Cantor Singer and Senior Pastor Joe MacLaren of University Carillon United Methodist Church (which hosts the temple congregation) stated: Temple Shir Shalom and University Carillon fully support the efforts of local law enforcement to prosecute these incidents as hate crimes. We echo the sentiments of those in our community who have decried these as acts of "ignorance and hatred." We stand in support of efforts to bring awareness to such incidents and in their place to foster cooperation, mutual respect and understanding among all people.

Rabbi David Kay of Congregation Ohev Shalom told WESH Channel 2 news the vandalism is hurtful, especially for someone who is Jewish.

"If they don't understand, that's a question of ignorance, and we need to educate them about the pain they're causing. If they do understand, it's a deliberate provocation," Kay said.

He said the swastika is a symbol of hatred and genocide.

"We can't blind ourselves to the fact that anti-Semitism isn't completely gone from our society," Kay said.

The Seminole County Sheriffs Office is treating this as a criminal mischief case.