New Bible translation speaks an eternal language: the land and people of Israel 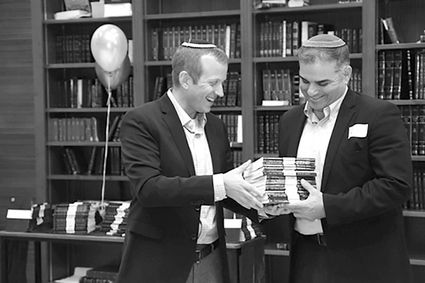 With the publication of a new edition of the Hebrew Bible under his belt, Rabbi Naphtali (Tuly) Weisz is set to manifest his vision for honoring and nurturing evangelical Christian support for Jews and the Jewish homeland.

It wasn't so long ago that Christians weren't always viewed as a Jew's best friend. But that's not how things are playing out today, says Weisz, the former pulpit rabbi of Beth Jacob Congregation in Columbus, Ohio. Ordained by the Rabbi Isaac Elchanan Theological Seminary at Yeshiva University, and also holding a law degree, Weisz made aliyah four years ago to a Jerusalem suburb where he now lives with his wife and their five children.

Before he ever dreamed of producing a Bible spotlighting the central role of Israel, Weisz founded Israel365: Your Daily Connection to the Land of Israel, a website that is jam-packed with information on Israel and deploys an email list distributing Israel-centric biblical quotes. These days, the Israel365 emails that land daily in the inboxes of some 200,000 Christians and Jews-70 percent and 30 percent, respectively-"serve as a constant reminder of the biblical commandment for Jews to make their home in the land of Israel," Weisz, 35, says.

In recent years, the rabbi has added BreakingIsraelNews.com, a news website covering the latest happenings in Israel through a biblical lens. But fresh off its launch, Weisz sees "The Israel Bible" as the hub around which his other programming spokes revolve.

"It's crucial to be able to see on every page of the Bible how central the land of Israel is to the holy book that both we and the Christians see as the word of God," he tells JNS.org. Beginning with the classic 1917 Jewish Publication Society translation, the team of biblical experts added insights into each one of the multitude of biblical references to the land. The five-volume paperback set of the Bible (what the Christians call the Old Testament and the Jews call the Torah) costs $39.99 on the Israel365 website. The longer and complete Tanakh version-20 paperback volumes, including the Torah, the Prophets, Judges, Proverbs, Psalms, etc.-was recently completed and is now available on the site for $120.

"You can find all kinds of translations of the Bible out there-88 percent of Americans own at least one," says Weisz. "But this is the first to draw our attention to the absolute centrality of the land of Israel and its eternal connection to the Jewish people."

Staying faithful to the original wording of the text, he adds, packs a special message for those who, like religious people of both faiths, read the Bible literally as the word of God.

"The Israel Bible" is a publication whose time has come, says Rabbi Shlomo Riskin, the founding chief rabbi of the Israeli community of Efrat, who penned the foreword to the new Bible.

"In these very critical and tempestuous times it is especially important to understand the inexplicable connection between the nation of Israel and the land of Israel," Riskin says. "And this is precisely what Rabbi Tuly Weisz has succeeded in doing in this timely translation of the Bible."

Though it is designed for all, by far the greatest number of readers of "The Israel Bible" are expected to be evangelicals Christians.

"The Bible, the land, and the people of Israel are one, and this new Bible reminds us of this bond," says Pastor Keith Johnson, founder of Biblical Foundations Academy International, upon visiting Israel from his Charlotte, N.C., home. "You can't read the Bible, the word of God, without understanding the significance of Israel-past, present, and future. In 1948, the prophecy came to pass in our own time and no one can disconnect the people from their land ever again. Now that the God and people and land of Israel are back together, history is happening here."

Jews and Christians share a biblical heritage, and the new Bible "shows even more clearly that this is the land God chose for the Jewish people," adds Johnson.

Sondra Baras sees the value of the new edition from both the Jewish and Christian perspectives. An observant Jew, Baras heads the Israel office of Christian Friends of Israeli Communities, an initiative that helps Christians find travel and programming experiences in Israel.

"Many in the evangelical community are trying to understand what Israel is all about and how it connects with what they're reading in their Bibles, so coming into contact with Jews in Israel brings the Bible to life for them," she says. "They get what we're doing here because their Bible is clear about why Jews belong in Israel."

Weisz writes in the new Bible's introduction, "Efforts to vilify the Jewish state seem to expand daily across the globe, as does the number of evangelicals who stand strong with the nation and the people of Israel as an expression of their commitment to God's word."

The rabbi has a prayer of his own to add: "May 'The Israel Bible' be a small contribution in bringing about the final redemption of Israel and the world."