Jewish moms on fire to impact the Jewish Community 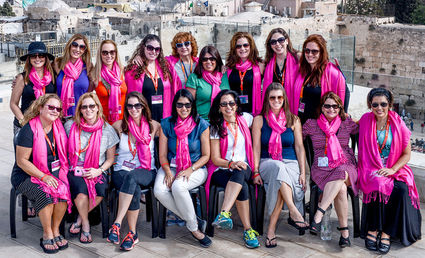 Eighteen Jewish moms from the Central Florida area reconnected with their Jewish identities after spending eight days together in Israel on the Jewish Women's Renaissance Project's Momentum trip to Israel.

Want to change the Jewish community or even the world? Inspire a Jewish mother. No offense meant toward men. However, if a woman who has young children is inspired, she inspires her family. If enough families are inspired, a community can be inspired; and if enough communities become inspired, it can change the world. This is the belief of eight Jewish women who started the Jewish Women's Renaissance Program (JWRP) in 2008.

How are Jewish women inspired? One proven way is to take them on a journey through Israel. Let them breath the air, feel the spirit, celebrate their unity in the land and their connection to Israel. Since 2009, more than 6,500 women have visited Israel through JWRP's flagship program Momentum, and they have all returned with a desire to "keep the momentum going at home."

This past October, along with 385 women from various parts of the country, 18 Jewish women from the Orlando area went on the Momentum trip through the collaboration of JOIN Orlando (JOINOrlando.org) and the Jewish Federation of Greater Orlando. Led by Federation Executive Director Olga Yorish and JOIN representative Sarah Gittleson, 16 Jewish moms of various ages traveled from Tzfat in the north to Masada in the south. Together they visited the artist's colony in Tzfat; the Kotel, where some became b'not mitzvot; experienced a Hebrew naming ceremony atop Masada; swathed in mud baths at the Dead Sea; baked challah and celebrated a Shabbat lunch in a rabbi's home in Jerusalem; made a special side trip to Susan's House (an on-the-job training program for teens at risk that the Federation helps support); took supplies, gifts and notes to IDF soldiers; visited Yad Vashem; and attended a seminar on how to bring the inspiration they have received back home.

It wasn't so much about where the women went on the trip, but more about what happened inside each one of them-in their spirits, individually and collectively. They embraced their Jewish identities.

"It was like being reborn as a Jew," said Lee Norber. "My spirit was jolted awake."

For Betsy Cohen, who converted to Judaism in 1991, the trip was a blessing. "It was time for me to find my purpose. Where do I fit in? I understood better why I embraced Judaism. Everything makes sense now."

Cohen was one of the ladies who celebrated her bat mitzvah at the Kotel, but her most memorable experience was the Shabbat lunch at a rabbi's house. "That experience energized me," she said. "It made me more focused on spiritual endeavors. I saw their humbleness and how happy they are! It was a humbling experience."

Ronni Mendelsohn was impressed by the visit to Susan's House because she saw how the Federation's money-our campaign dollars-is used.

How did this life-changing experience come about? Stacey Soll heard about JWRP from a friend in Atlanta. She shared it with Mendelsohn and together they presented to the Federation board the idea of taking a group of Jewish moms on the Momentum trip. The goal of the women was to get Jewish moms (and their families) more involved in the Jewish community.

Gittleson-whose husband Rabbi Gabi Gittleson is one of the founders of JOIN Orlando-jumped on the band wagon, too. She has been to Israel and saw this as an opportunity for Jewish moms to become empowered and get excited about their Jewish community.

Norber, who is now trying to live Judaism on a daily basis and is digging deep into her Jewish roots, first learned about the project while having lunch with a friend in the Federation. "Now my passion is for Israel and being Jewish," she stated. "I don't want to be Jewish-I want to BE Jewish!" she exclaimed (the written word doesn't quite capture her enthusiastic spirit).

Each woman had to submit an application for the program, and the selections resulted in a good mix-from business women to stay-at-home moms, ages from 32 to somewhere in their 50s.

"It was unbelievable how well we all meshed," said Mendelsohn.

"We became very connected as a group," said Gittleson.

"It was most important how the group bonded," said Yorish.

"We couldn't do it without the group," said Cohen, who was so happy to learn she was selected. "I now have 17 sisters!"

Because the women are now a tightly knit sisterhood, the momentum to continue this unity is undeniable. Upon returning to Orlando, each one of them wanted to know "what can we do to make an impact on the Jewish community?"

There are programs through JWRP for follow-up education and community engagement. So far, the ladies have jointly attended many events, including the IDF concert at Congregation Ohev Shalom, baked Challah together as part of The Shabbat Project, and many attended their "sister" Stacey Soll's son's bar mitzvah. Mendelsohn is chairing next year's Choices event, and already her "sisters" are asking how they can get involved.

Besides these events to keep the group close, the ladies are talking about ways to expand their new-found passion for their Jewish identities within the community. Talks are already in the works for the possibility of another trip next year.