Who was the greatest Portuguese? (and why?) 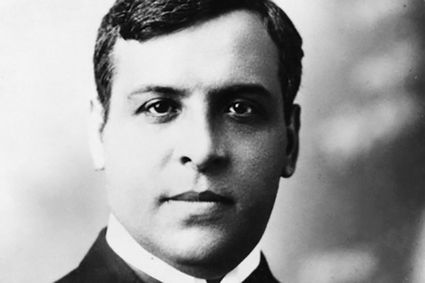 When Antonio de Oliveira Salazar, Portugal's authoritarian ruler since 1932, finally was unable to rule effectively and his regime subsequently deposed by a military coup in 1974 (The Carnation Revolution), there was universal agreement that he left Portugal the poorest and most backward nation in Western Europe. Reporters on the scene in Lisbon reported signs of jubilation equaling V-E Day in London or Paris.

How is it possible then that when a Portuguese television program ran a survey in 2007 and staged write-in vote for "The Greatest Portuguese" amidst comments from media commentators and letters to the editor that Vasco de Gama or Magellan, great literary figures such as Camoes or one or another famous king would be the certain winner, it turned out that it was none other than Salazar. Many voters cited ending the early instability of the republic in Portugal, his competence, dedication, austerity and integrity as well as his ability to keep out of World War II.

The TV special featured individual documentaries advocating the top 10 candidates. The final vote took place on March 25, 2007. Salazar was the winner with 41 percent of the write-in votes! Nevertheless, in second place was Alvaro Cunhal (19.1 percent)-the general secretary of the Portuguese Communist Party (1961-1992) and a life-long opponent of the Salazar regime! This showed if anything how Salazar's heritage is still much disputed.

In surprising third place however-and a testament to the conscience of the nation (one often suspected by many Jews as still anti-semitic) was Aristides de Sousa Mendes (13.1 percent), a career diplomat demoted by Salazar who is remembered with great honor as one of the Righteous Gentiles by the State of Israel.

Along with the noble Swedish ambassador to Hungary, Raoul Wallenberg, de Sousa, another diplomat of much lesser rank, the Portuguese consul in Bordeaux, at the time of the German conquest of France in June 1940, he deserves to be regarded as a truly Righteous Gentile, duly honored in his own country. An austere career diplomat and devout Catholic, he was struck by the awful human tragedy engulfing so many refugees, among whom were many Jews trapped in France, and he took it wholly upon himself, risking his career, to use his office to help all of them in contradiction to strict orders.

Sousa Mendes provided families with Portuguese documents to legally enter Portugal by transiting Spain from France. He did this knowing that he would be severely punished, and doubted that his documents would be honored by Spanish officials. Salazar, the clever Portuguese dictator knew that he was most vulnerable to a possible German-supported Spanish attack if suspected of treachery, or if Spain would decide to realize its age-old ambition to annex Portugal. He therefore played for time and demonstrated pro-Axis sympathies by shipping supplies of much needed foodstuffs to Spain. He expressly forbade his diplomats to grant transit visas to "Jews expelled from countries of their nationality" and "stateless persons," as well as all "those who cannot safely return to the countries from whence they came."

He reinforced this with another directive on May 17, 1940, that "Under NO circumstances" was any visa to be issued unless previously authorized from Lisbon on a case-by-case basis. This was a reserve safety clause for the dictator, who knew that he might find it advantageous to let a few prominent individuals escape to America to win goodwill there. However, he never expected a third-rate minor diplomat like Sousa Mendes to open the floodgates, or that the Spanish authorities would accept this wave of refugee traffic.

Sousa Mendes personally intervened at the border when Spanish guards questioned the authenticity of the visas at the border towns of Bayonne, Hendaye, and Irun. Approximately 30,000 refugees, among them 10,000 Jews, directly owed their lives to the Portuguese consul who was recalled and declared insane, the official explanation later reported in the Spanish and Portuguese press. Pereira, the Portuguese ambassador to Spain, had to intervene and relieve Sousa Mendes of his post.

Salazar demanded an enquiry and that "appropriate punishment" be meted out, but before a decision could be taken, Life magazine featured a headline story on July 29, 1940 calling Salazar "The greatest Portuguese since Henry the Navigator!" The naïve Life reporters could not accept the explanation that a minor Portuguese consular official had acted on the basis of his own conscience. They were unaware of the press reports of insanity or the charges to be filed against him so they concluded that this magnificent act of humanity must have been the work of Portugal's leader, Salazar. So, although he never forgave Sousa Mendes, Salazar did not close the Portuguese border for the remainder of the war and Lisbon became the chief embarkation point to the new world for refugees who managed to flee Nazi-occupied Europe.

Embarrassed by the favorable American press received by Salazar in June 1940, Franco made it Spanish policy to accept all refugees who legally entered Spain and even gave special attention to Jews of Spanish-Portuguese descent (the "Sephardim"). He also realized that it could conceivably be in Spain's interest to maintain a decent and humanitarian respect for the refugees and he was determined not to play "second fiddle" to Salazar. Although neither had intended to aid Jewish refugees, the inherent sense of rivalry between the two countries inadvertently came into play as a result of a sensationalist story in the American press of humanitarian interest. 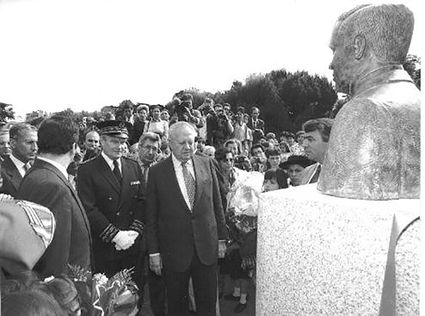 Sousa Mendes died in poverty on April 3, 1954, owing money and still in disgrace with his government. In 1987, the Portuguese government began to rehabilitate Sousa Mendes' memory and granted him a posthumous Order of Liberty medal, one of that country's highest honors. A year later, the Portuguese parliament officially dismissed all charges, restoring Sousa Mendes to the diplomatic corps posthumously by unanimous vote and honoring him with a standing ovation. In 1994, former Portuguese President Mario Soares dedicated a bust of Sousa Mendes in Bordeaux, along with a commemorative plaque at the address at which the consulate at Bordeaux had been housed. In 1995, Portugal held a week-long National Homage to Sousa Mendes, culminating with an event tribute to him in a 2000-seat Lisbon theater that was filled to capacity. A commemorative stamp was issued to mark the occasion and the Soares declared Sousa Mendes to be "Portugal's greatest hero of the twentieth century."