Where do Israeli interests fit in the Russia-Turkey-Syria puzzle? 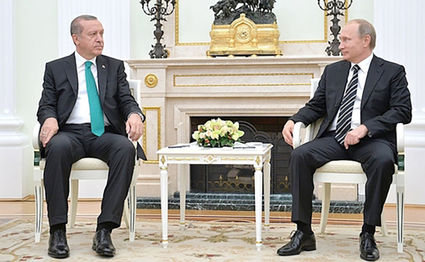 The Syrian civil war continues to fester and has now drawn in nearly every major world power, including the United States, France, the United Kingdom, Russia, and Syria's neighbor of Turkey, who all have different and sometimes opposing interests.

The geopolitical situation recently escalated to new heights on Nov. 24, when a Turkish F-16 fighter jet shot down a Russian Su-24 fighter jet near the Turkish-Syrian border. Turkey, which is a member of the North Atlantic Treaty Organization (NATO), accused the Russian jet of repeatedly violating its airspace and is concerned with Russian attacks on Turkmen rebels-a Turkish ethnic group in Syria-who have been fighting the Syrian regime of President Bashar al-Assad, a government Russia and Iran both support.

While the Nov. 24 incident took place on the opposite end of Syria as far as the Israeli border is concerned, the conflict next door has naturally loomed large for the Jewish state, which has been increasingly concerned about Iran and the Lebanon-based Hezbollah terrorist group's involvement on one hand, and the Islamic State terrorist organization's role on the other. What do recent tensions between Russia and Turkey mean for Israel, and can the Jewish state benefit in any way from this conflict?

"As [Russian President Vladimir] Putin has now publicly pointed to yet another enemy for Russia, his list of allies continues to grow thin," Anna Borshchevskaya, an expert on Russia's Middle East policy for the Washington Institute for Near East Policy think tank, told JNS.org regarding the Turkey situation. "It would be in Putin's interest to seek improvement of relations with countries that he has not yet named his enemies, and Israel is one such country."

Despite the divergent goals of Russia and Israel in Syria, the Jewish state-unlike other Western countries-has coordinated with Russia on its military campaign in Syria in order to avoid any inadvertent clashes.

In late September, Israeli Prime Minister Benjamin Netanyahu met with Putin in Moscow to establish a military mechanism in order prevent any inadvertent clashes between Israeli and Russian forces operating in Syria.

The recent climate change conference in Paris, which brought together major world leaders in an effort to reduce global carbon dioxide emissions, proved to be an important backdrop for world leaders discuss other issues-such as the Syria civil war.

"I just had an important talk with Russian President Vladimir Putin," Netanyahu told reporters at the Paris conference. "We agreed to deepen the coordination between us in order to prevent mishaps and to do so on a broad basis."

"I think that every citizen of Israel understands today, in light of recent events on the Turkish border, the great importance of my trip to Moscow and these ongoing contacts with the Russian president," added the Israeli leader.

Netanyahu's comments came on the heels of a statement by Israeli Defense Minister Moshe Ya'alon praising security coordination with Russia that has prevented Russia-Israel clashes in the region. According to Ya'alon, a Russian jet recently breached Israeli airspace, but the issue was "immediately fixed through communications channels."

Separately in Paris, Turkish President Recep Tayyip Erdogan, who has been known for his rampant anti-Semitism and anti-Israel rhetoric, told a reporter from the Israeli radio station Kol Yisrael that he could "fix" ties with Israel, which have been strained for several years over the 2010 Gaza flotilla incident (in which Turkish militants attacked Israeli commandos who boarded a vessel that tried to breach the blockade on the Gaza Strip, resulting in clashes that killed nine Turkish citizens). Erdogan, however, was immediately rushed off by aides without providing further details.

"Erdogan's remarks were curious given the accepted wisdom that Israel and Turkey have worked out the basic parameters of compensation over the Mavi Marmara incident, but that Netanyahu is reluctant to sign off and give Erdogan a victory," Michael Koplow, who serves as policy director for the Israel Policy Forum think tank, told JNS.org.

"The implication is that the ball is in Israel's court at the moment rather than Turkey's, and so unless Erdogan was referencing some way in which he can sweeten the deal for Israel, it is likely just the latest example of Erdogan attributing to himself powers that don't necessarily comport with reality," Koplow said.

While nearly everyone in the civilized world agrees that Islamic State is a menace that needs to be defeated, differing national interests in the Syrian civil war have led to confusion when it comes to trying to solve that conflict.

Yet for Israel, which is less concerned with the threat of Islamic State jihadists and more focused on the support Iran and its proxy-Hezbollah-provide for Assad, forging closer ties with Russia may seem paradoxical.

"I think part of what's happening is that Israel has seen for some time now Russia's growing influence in the Middle East as the U.S. retreated from the region," said the Washington Institute's Borshchevskaya. "Israel has very real security concerns, such as Russian weapons falling into Hezbollah's hands. This situation I think from Israel's perspective adds to reasons for increasing cooperation with Russia when the U.S. reduces its presence in the region."

But while Israel is concerned about Iran and Hezbollah, it has taken a more pragmatic approach to the Syrian conflict and has not strongly pushed for Assad's removal, as Turkey has done.

"Israel has been very careful to avoid similar tensions with Russia as Turkey has experienced over Syria. For starters, Israel has taken a more neutral stance on its preferred outcome in Syria, and thus unlike Turkey, does not see Russian support for Assad as an insurmountable problem," Koplow said.

The war of words between Russia and Turkey has continued to escalate, as Turkey has refused to apologize for the fighter jet incident and Russia has sought sanctions against Turkey. On Dec. 2, Russian military officials upped the rhetoric by saying they have "hard evidence" that Turkey is involved in oil trade with Islamic State.

"The highest political leadership of the country-President Erdogan and his family-are involved in this criminal business," Antonov said.

Erdogan struck back, saying in a speech at Qatar University that "no one has the right to slander Turkey, especially the slander of Turkey buying ISIS oil."

The Turkish leader said he would be willing to resign if Moscow's claims are proven true.

While Russia and Turkey continue to trade barbs over Syria, it is unclear what the unfolding situation holds in store for Israel as the Jewish state seeks to maintain its comparatively neutral stance on the civil war.

"I don't see Israel benefiting in any real way from Russian-Turkish tension, and while the war of words between Russia and Turkey is escalating, neither side will benefit from real military confrontation," Koplow told JNS.org. "I expect Russia and Turkey to be locked in a mini-cold war going forward, but I would be surprised to see things spiral out of control and lead to an actual hot war."