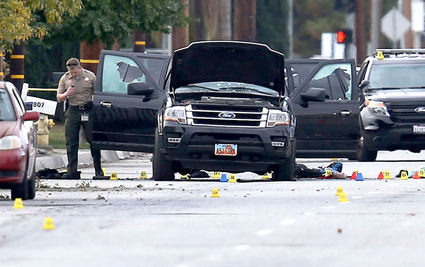 Law enforcement officials investigating the Ford SUV at the scene where suspects of the shooting at the Inland Regional Center in San Bernardino, Calif., were killed in a shootout with police, Dec. 3, 2015.

(JTA)-Since the mass shooting in the California city of San Bernardino, U.S. authorities have been piecing together what might have led Syed Farook and his wife, Tafsheen Malik, to gun down 14 of Farook's colleagues at a holiday party for county health department employees.

The attack raises a host of questions. Here are five to consider.

1. In Israel, armed civilians stop terrorist attacks. Should that be a model for America?

Opponents of gun regulation argue that attacks like the one in San Bernardino, the Nov. 27 Planned Parenthood clinic shooting in Colorado and even the 2012 massacre at the Sandy Hook elementary school in Newtown, Connecticut, demonstrate the need to have an armed citizenry that could stop gun-toting assailants quickly by force. Some look to Israel as a model, noting that armed civilians have played a major role in halting the recent lone-wolf attacks by Palestinians.

There are, however, some key differences between the attacks in Israel's current terror wave and the mass shootings typical of America. In Israel, the Palestinian assailants usually are armed with less sophisticated weapons, such as a knife, and the lone-wolf attacks have been poorly planned, making them much easier to disrupt. Israel also has strict gun controls: Gun owners are limited to a single pistol, may purchase only 50 rounds of ammunition per year, cannot own assault rifles, and must undergo extensive mental and physical tests to receive a weapon. Moreover, Israeli civilians who do carry weapons tend to be well trained (and have years of army experience).

In America, the assailants have been armed with military-style automatic weapons, usually legally purchased, and often evinced methodical preparations for their attacks (one of the San Bernardino assailants went to target practice twice in the days before the shooting, and the couple had bomb-making materials in their home). Second, though guns already are readily available in America, not a single mass shooting has been stopped by an armed civilian, according to an article in Mother Jones. Finally, statistics show that Americans who own guns are far more likely to die by gunshot-whether by homicide, suicide or accident-than Americans who don't own guns.

2. How will the stepped-up bombing of ISIS affect the likelihood of terrorist attacks in America?

By all accounts so far, the San Bernardino shooters acted on their own volition, without coordination or help from ISIS. Even if America were to "carpet bomb ISIS into oblivion," as Texas Sen. Ted Cruz, a GOP presidential candidate, suggested over the weekend, that still wouldn't stop Islamic fundamentalists like Farook and Malik from buying guns in America and perpetrating a San Bernardino-style attack.

More likely, one thing has very little bearing on the other: Islamic terrorists will be motivated to hate and attack America regardless of what America does or doesn't do in the Middle East. In the fight against terrorism, good defense at home matters more than good offense abroad.

3. Why did the San Bernardino shooters terrorize people they knew?

Most terrorist attacks are perpetrated by strangers against strangers. Not so in San Bernardino, where Farook chose to kill co-workers at the Inland Regional Center of the San Bernardino County Department of Public Health. The perpetrators' choice of target leaves more questions than answers, but it does suggest that attacks may be motivated by an interplay of factors: not just religious radicalism, but also personal animosities. Farook reportedly got into a heated argument with Nicholas Thalasinos, a pro-Israel Messianic Christian whose wife said he was anti-Muslim.

4. Does calling it a terrorist attack make any difference?

There is some ambiguity when it comes to the language we use to describe mass shootings. All provoke terror-among victims, in the community-but not all fit the dictionary definition of terrorism. That, according to Webster's, is when individuals "use violent acts to frighten the people in an area as a way of trying to achieve a political goal."

By this definition, the Planned Parenthood clinic shooting in Colorado Springs, which left three dead, appears to have been a terrorist attack; the perpetrator, Robert Lewis Dear Jr., holds extreme-right views, particularly in his opposition to abortion. The 2012 shooting in Newtown that left 26 victims dead, including 20 first-graders, would not be considered terrorism by this definition, since the shooter, Adam Lanza, was more deranged than motivated by politics.

But does it make a difference? Yes and no. Yes, because if we understand the motive, authorities may focus their monitoring on those who harbor similar motivations (political extremists, Islamic radicals). No, because only an infinitesimal proportion of those who hold extremist views take violent actions as a result; there are legal limits to monitoring; assault weapons are easily available to almost anyone who wants them in America, and most mass shootings in America do not qualify as "terrorism."

America doesn't have the dark history with hate-fueled nationalism that Europe has. But Donald Trump, who has dominated most Republican presidential polls since the summer, is sounding more and more like a European far-right nationalist. His latest proposal, to bar all Muslims from entering America, would introduce in America a kind of religious discrimination never before seen in this country.

With some fellow Republican candidates reticent to condemn Trump's rhetoric for fear of alienating the right-wing voter base, is America's right-wing adopting the sort of xenophobic nationalism that long has haunted European politics? Hair color may not be the only thing Trump shares with Marine Le Pen, the leader of France's far-right National Front who just led her party to a first-place showing in the country's regional elections.

The Jewish groups who would be obvious candidates to condemn Trump's Muslim ban have done so-the Anti-Defamation League, the American Jewish Committee, the Religious Action Center for Reform Judaism, among others. But others, like the Conference of Presidents of Major American Jewish Organizations, have not (as of press time). And an Orthodox Union spokesman told JTA the organization has no response to Trump's declamation.