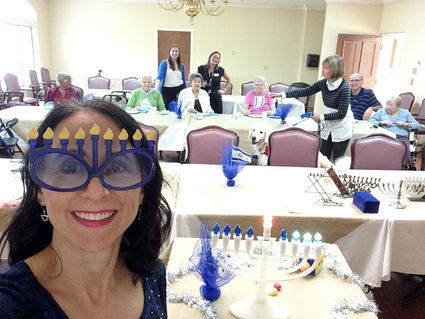 Judy Procell, aka Ms. Chanukah, and residents at The Westchester in Winter Park.

This Chanukah season Judy Appleton Procell has been literally putting her "selfie" out there on behalf of the elder-care community she serves as a program director for the Jewish Pavilion. "This year I have put a different spin on the Chanukah parties I have hosted on behalf of the Jewish Pavilion," remarked Procell. "I have taken a selfie at all nine parties so I can share these 'Kodak moments' with the community, and replicate the joy and the connection that we bring to our seniors."

During a Chanukah party on Dec. 9at The Westchester of Winter Park, Procell scooted off to the side to shoot a selfie that captured the Chanukah spirit aglow throughout the blue and silver bedecked party room. She positioned herself in the corner of the photo wearing her iconic Chanukah sunglasses, the lens capturing five seniors in the background enjoying a nosh of Chanukah goodies including 89-year-old Sylvia Stone, seated beside her son, Mark, an avid Pavilion volunteer. Volunteer, Hilary Cohen, attempted to get her therapy dog, Morgan to sit still for the photo, but it was not to be a dog day afternoon.

The smell of fresh latkes distracted Morgan, and he followed his nose away from view. Morgan scooted back into view and made the picture at the last minute.

Friends Board member and Pavilion volunteer, Susie Stone, also attended the Westchester party, and has assisted at many others hosted by Procell throughout the years. Stone credits Procell as her reason for joining The Jewish Pavilion. Stone shared, "I met Judy at the very first event I attended with The Jewish Pavilion at The Westchester, for my mother-in-law, and my father-in-law was still there at that time. I saw the dedication and hard work she puts into all of her events and all the energy she puts in to make seniors feel happy and recognized. She has a unique way of making each resident feel special. After attending that first event, I knew the Pavilion was an organization that I wanted to be part of, too."

Procell shared that she has been putting herself out there on behalf of Orlando's Jewish community since she was a young girl. The program director told the handful senior attendees about her childhood growing up as one of the few Jewish children at Aloma Elementary, located just around the corner from the elder-home where they now celebrated. She shared that for years she listened to her school chorus sing exclusively Christmas songs, without even one Chanukah song to represent the small number of Jewish children at the school. At just nine years old, Procell made copies of "Chanukah Oh Chanukah" and brought them to school for the chorus to learn and to sing. From that point on Chanukah was represented at her elementary school. Later, she brought the presence of Chanukah to her middle and high school, as well.

Since 2010, Procell has carried on her work of standing up for what she holds dear in her role as Jewish Pavilion program director. She shared, "Many of our seniors would be all alone in this world without the Jewish Pavilion. Some reside in homes with just a few Jewish residents. I make an effort to provide a gentle touch and to make a connection with each person when possible."

Procell connects with more than 14 assisted living facilities and nursing homes, providing regular programming for about half, as the resident population fluctuates. She views the Pavilion as an extended Jewish family for seniors in elder care, and reaches out to local relatives when possible.

She adds, "We take every opportunity to help our seniors maintain their connection with family. We make a point to contact a, sibling or an adult grandchild of an elder resident, welcoming them to an upcoming Shabbat or Chanukah party. Sometimes the Pavilion is the only holiday celebration the entire family attends."

Like most program directors, Procell snaps photos of her seniors and shares them with extended family, noting that residents in homes often don't have current photos. 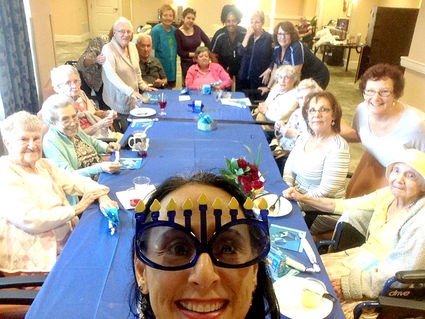 Ms. Chanukah with residents at Encore at Avalon Park.

Procell shared that she has benefitted from her job just as much as the seniors that she serves. She stated, "I had just finished a series of breast cancer treatments, when I received an inquiry from Nancy Ludin, executive director of the Jewish Pavilion. The timing was perfect, as I was looking to get back into the workforce. My job as Pavilion program director for the Oviedo, Winter Park, and Winter Springs communities has proven to be healing in many aspects."

Proving her dedication to the seniors she serves, Procell arranged to have further reconstructive surgery after her Chanukah parties were completed in mid-December. At the time of this printing she is recovering well from her procedure and is looking forward to celebrating Tu' Bishvat with elder-care residents in January 2016.