A good read for the new year: Turning negative thinking into positive outcomes 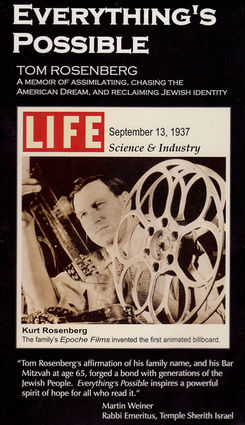 Subtitled "A memoir of assimilating, chasing the American Dream, and reclaiming Jewish identity, author Tom Rosenberg stated, "Judaism is a religion that accepts change. This makes me proud to be a Jew."

He was six in 1938, when his family escaped Nazi Germany. When the family arrived in America, they adopted the anglicized name Ross. "Everything's Possible" describes his once-prosperous family's struggle to assimilate and pursue the American Dream.

However, in 2000, concerned that immigrant bashing was becoming increasingly prevalent, the author reclaimed his family's heritage and the name Rosenberg. In a "My Turn" essay for Newsweek, he wrote "I, too, am an immigrant."

For more than 40 years Rosenberg has applied a discipline to communications that brings clarity to language, promotes conflict resolutions and influences the way one thinks. This "discipline" eliminates the word "no" and all other negative words from the language. He has applied this discipline to corporate communications, successful political and marketing campaigns and to his book.

"My memoir demonstrates that negative thoughts, messages and verbal communications can be turned into positive and clear expressions by substituting 'what is' for 'what isn't,'" he stated.

What inspired the message of "Everything's Possible" was a sermon about happiness Rosenberg heard more than 50 years ago.

"The three things it takes to be happy in life are that you have love, you have to have a sense of accomplishment, and you have hope," he said.

"That's what the book is about."