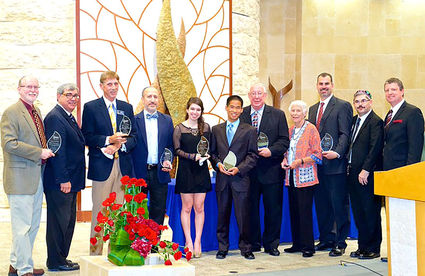 On Nov. 8, 2015 four conservative congregation's Men's Clubs held an event to honor individuals from each of their participating synagogues for their outstanding leadership with their synagogue and their community. The event, called "Man of the Year/Youth of the Year," was held at Congregation Ohev Shalom in Maitland.

All of the Men's Clubs belong to the International Federation of Jewish Men's Clubs (FJMC).

One hundred and sixty people attended the awards ceremony, which included cocktails, music, the awards presentation and dinner.

The four conservative synagogues worked together to recognize these outstanding individuals at the event.

This is the second Men's Club Man of the Year/Youth of the Year event and many thanks go to Andy Rosen and the Men's Club presidents for their hard work in making this happen: Mark Lichtenstein/Greg Alman, Congregation Beth Am; David Scholl/Todd Bergman, Temple Beth Sholom; Wayne Bilsky/Joe Ihns, Temple Israel; and Howard Kaplan/Bart Neuman, Ohev Shalom.

After dinner, the musical group "TBS Jew Man Group" entertained the guests with a great selection of lively songs.