From flotilla to friends? Turkey-Israel reconciliation not so simple 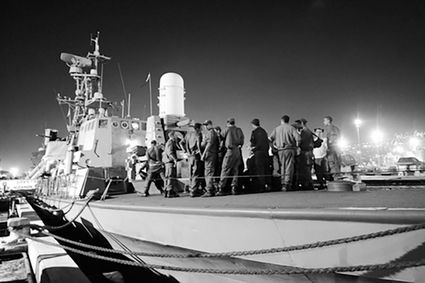 On May 29, 2010, Israeli naval forces prepare to implement the Israeli government's decision to prevent a Turkish flotilla from breaching the maritime blockade on the Gaza Strip. Two days later, clashes aboard the Mavi Marmara flotilla that resulted in the deaths of nine Turkish militants spawned the deterioration of Israel-Turkey relations.

Israel and Turkey are close to signing a deal to normalize diplomatic ties following a secret meeting in Switzerland between senior officials.

According to the Israeli Prime Minister's Office, the two sides agreed that Israel would establish a compensation fund to pay the families of the nine Turks killed on the Mavi Marmara vessel in 2010, that all Turkish legal claims against Israel will be dropped, and that ambassadors will return to both countries.

Hamas terrorist leader Salah al-Arouri, who Israel believes was behind the kidnapping and murder of three Jewish teens in Gush Etzion in June 2014, will no longer be allowed to reside in Turkey or operate from there. Additionally, the two countries will commence talks about a gas pipeline from Israel and the sale of Israeli gas in Turkey.

"The reports are certainly encouraging, but given what we've seen in the past with false starts in the reconciliation process, I'm hesitant to put too much credence in anything until there is a signed agreement," Michael Koplow, policy director for the Israel Policy Forum think tank, told JNS.org.

Turkish-Israeli relations broke down following the 2010 Gaza flotilla incident, in which Israeli commandos boarded the Mavi Marmara, which was attempting to break the blockade of Gaza. After Turkish militants attacked Israeli commandoes, nine Turkish citizens were killed in clashes. In 2013, at the request of U.S. President Barack Obama, Netanyahu apologized over the phone to Turkish President Recep Tayyip Erdogan for the flotilla incident.

Israel and Turkey have been close to normalizing ties before. In April 2014, Erdogan told Charlie Rose of PBS that a deal for "normalization" would be signed within a few weeks. But shortly afterward, Israel's Operation Protective Edge was launched in Gaza, leading to scathing condemnations of the Jewish state by Turkish leaders.

Then, during the United Nations climate change conference in Paris this month, Erdogan told an Israeli reporter that he believed it was possible for Turkey and Israel to repair frayed ties.

Turkey is dealing with a number of geopolitical challenges-including tension with Russia over shooting down its fighter jet in November, the continued destabilization of Syria, and the threat of the Islamic State terror group-that may have led the country to seek warmer ties with Israel.

"I think a lot of the movement on reconciling has to do with the same factors in the past-Syria and energy-becoming more acute and pushing the sides together, but even if an agreement is signed, there is a lot of recent unpleasant history to overcome. I'd expect economic ties to be an easier sell than tight political and security ties, especially in light of the high volume of trade that exists already, and I expect there to be limits to cooperation," Koplow told JNS.org.

Indeed, despite strained political relations, annual trade between Israel and Turkey stands at a robust $4 billion.

Yet Erdogan has been known for his hostility towards Israel, support for Hamas, and outright anti-Semitism. During this year's hotly contested Turkish Parliament elections, in which Erdogan's AKP party failed to gain an outright majority-though that outcome was later reversed in a November re-election-Erdogan lashed out at the foreign media for criticizing him and floated an anti-Semitic conspiracy theory in the process. At a rally, he said that "Jewish capital" funds the New York Times and that the newspaper has consistently criticized Turkey's leaders, dating back to the days of the Ottoman Empire.

"It's clear who their patrons are. There is Jewish capital behind it, unfortunately," Erdogan said at the time.

All the while, Turkey may been feeling pressure over Israel's outreach to Turkish rivals Greece and Cyprus. The Jewish state is expected to take part in a summit in Nicosia next month to discuss natural gas, security, and regional issues.

Going forward, while Israel and Turkey may see warmer ties, years of hostility by Erdogan and his Islamist government complicate the picture.

"Overall, there's no question that reconciliation will be a positive development, and it's one that is a consequence of Russian involvement in Syria and the various complications that has caused, mainly on the Turkish side. But it's important to understand that the [Turkey-Israel] relationship of the 90s is not coming back," Koplow said.