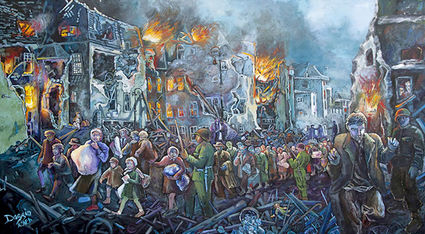 This painting, titled 'Warsaw Ghetto,' is by artist Judith Dazzio. The exhibit, titled 'The Profound Effect,' includes 21 works by Dazzio, and will be on exhibit at the Holocaust Center in Maitland from Jan. 18 through March 18. For more about the artist and the Holocaust Center's 30th anniversary, featuring a series titled "I Remember: Reflections of Eyewitnesses to the Holocaust," see page 3.

As a child, Judith Dazzio didn't have a connection to the Holocaust. She is not Jewish, she did not live in Europe, and she did not live during the war years. There was little reason to expect that the Holocaust and its images would be the center of a decade-long passion in her adulthood.

In sixth grade, Dazzio's class was visited by a Holocaust survivor, and that single visit laid the groundwork for an extraordinary body of work. The St. Petersburg, Fla.-based artist spent 10 years creating art that represents testimony of that Holocaust survivor.

Dazzio talks about the inspiration for the exhibit in very visual terms. "I can still see the numbers on her arms. I can see the faded pictures of her children who had been killed, and how she cried when speaking about them," she said.

Because the paintings were based on her story, many are historical and are limited to the Warsaw ghetto and Birkenau. The rest of the paintings honor that survivor's children and all children devastated by war: the boy comforting his younger brother in the absence of their parents, or the vulnerability of a young girl as she is stripped of everything she knows.

"The paintings reflect my emotional reaction to the helplessness and fear that they must have felt," she said. "I wanted them to be accurate, creative and powerful paintings that evoke emotion and thought." 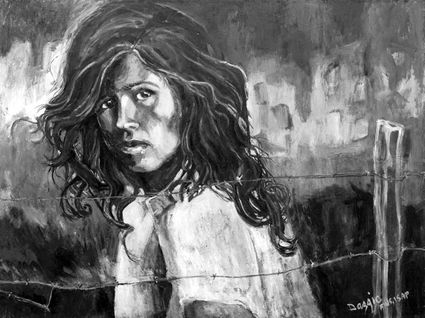 The opening reception for the series on Wednesday, Jan. 27-International Holocaust Remembrance Day-brings together the distinct themes of the 2016 cultural season at the Holocaust Center.

The Jan. 27th program will feature the Center's founder, Tess Wise, speaking about her life for the first time in many years. The program begins at 6 p.m. and will be at the Holocaust Center in Maitland. There is no cost to attend, and reservations are appreciated but not required.

The evening will also include a brief presentation by the exhibit artist, Judith Dazzio, speaking about the power of survivor testimony and the tragedies of children whose lives have been lost or forever changed by war.

More information about the program can be found at http://www.holocaustedu.org or by calling 407-628-0555.