How the jewfish got its name 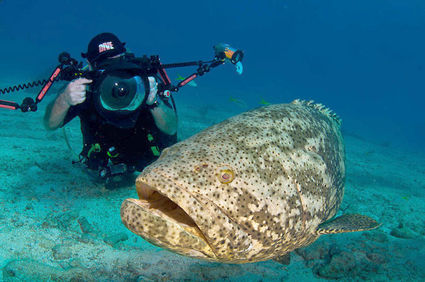 The jewfish in all its glory.

(Jewniverse via JTA)-Why does putting the word "Jew" in front of any object make it sound a little anti-Semitic? There are several theories for how the jewfish (Promicrops), an Atlantic saltwater grouper with fins and scales, got its name. It may derive from the Italian giupesce, which means "bottom fish," or may have originally been named "jawfish" for its large mouth. A less flattering theory is that in the 1800s, jewfish were declared inferior and only fit for Jews.

The Maryland-based American Fisheries Society received complaints about the name for decades. It announced in 2001 that the name was deemed "culturally insensitive" and was changed to goliath grouper-not for the biblical Philistine Goliath who was slain by David, but because of the fish's ability to grow up to 700 pounds.

The ichthyologists-that is, fish scientists-pointed out a precedent: squawfish. The name was changed to pikeminnow because Native Americans felt it was derogatory toward women. But the fish's name lives on in places like Jewfish Point and Jewfish Creek in Los Angeles and South Florida. Basically, places where Jewish retirees also tend to congregate.

Avishay Artsy is a news reporter and producer at Southern California public radio station KCRW and a contributing writer for the Jewish Journal.