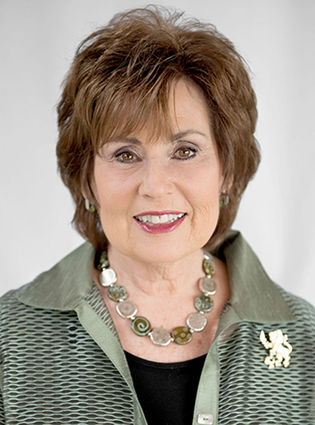 Woman of Choice Barbara Chasnov has spent decades in service to the community. "Every now and then I have an idea..." That's a familiar refrain to friends and colleagues of Chasnov, a volunteer, an educator and a champion of numerous causes that have helped to shape the Greater Orlando Jewish community since she arrived in Central Florida in 1982.

Known for her Southern charm, her attention to detail and her amiable disposition, Chasnov is living proof that style and substance are not mutually exclusive.

During her 34 years in Orlando, Chasnov has transformed lives, earning several well-deserved accolades as a result. Next month, Chasnov can add another: the 2016 Harriet Ginsburg Woman of Choice Award. The award will be presented to Chasnov at Choices 2016, the Jewish Federation of Greater Orlando's largest Women's Philanthropy event of the year, on Feb. 9 at Congregation Ohev Shalom (COS) in Maitland.

The Woman of Choice Award is an honor bestowed annually upon a woman who embodies a commitment to Jewish life by exhibiting leadership, a spirit of volunteerism and a passion for keeping the Greater Orlando Jewish community vibrant and growing.

And when it comes to leadership, volunteerism and passion, Chasnov is in a league of her own, friends say.

"It's just in Barbara's bloodstream," said Ina Porth, a longtime friend and last year's Woman of Choice. "She has always been the ultimate volunteer-with her time, her creative ideas, her finances... In every way imaginable, she is a passionate Jewish woman."

A member of COS along with her husband, Burt, Chasnov has served on many committees for the synagogue over the years, and she's always one of the first to greet new members and guests, making them instantly feel like old friends.

"Her genuine interest in making sure that everyone's humanity is valued, especially otherwise marginalized individuals, is a constant," said Marli Porth, JFGO's director of Community Relations and Leadership Development, who has known the Chasnovs since she was a child. "I remember that after childhood Shabbat, 'Ms. Barbara,' as we called her, and Burt would seek out a woman in our congregation who had developmental disabilities. Barbara would hold her hand, sit with her at services and ensure she was a part of the oneg social scene as much as possible."

Longtime friend Sandi Saft, one of the co-chairs for Choices 2016, calls Chasnov "a great connector" who is always thinking of others. "Barbara is very generous of her heart and her time."

"I just love it when Barbara calls to share one of her ideas," Saft said, "because it's always an idea that involves community, making something better or nicer and getting everyone involved."

Chasnov's passion is especially evident when it comes to education. As media specialist for Lockhart Middle School, Chasnov could always be counted on to go the extra mile, forging a special bond with students who benefited from the creative programming she instituted.

She organized the "Teach In" project at Lockhart for many years, mobilizing members of her large circle of friends in the community to teach a class about their business or profession. Many of Chasnov's education projects have been designed to serve at-risk students. One project at Lockhart, in particular, was illustrative of Chasnov's unique talent of lifting people up while teaching them the value of making a difference in the lives of others.

Chasnov created the Clown Project to help at-risk students develop their self-esteem. As part of the program, students learned to become clowns and create costumes. The students would then visit area nursing homes and community events to spread some cheer. Students' eligibility for the program was tied to attendance and improving their grades. The program was a huge success for students, and Chasnov's innovation earned her the Walt Disney Teacherrific Award.

One of Chasnov's favorite projects at Lockhart was the Lancer Café, which encouraged reading. She arranged donations from her friends, local businesses and retailers. Students who participated received books, along with the honor of time in the "café" and other rewards.

Chasnov's generosity at Lockhart was not limited to its students.

"Barbara did many behind-the-scenes, unrecognized mitzvahs for her co-workers," Saft said. "She always lent a helping hand to collect clothing, coats and whatever was needed for the families at her school."

Friend Roz Fuchs Schwartz said Chasnov's commitment to education remains an asset to the community. "Barbara is very creative as a teacher, always coming up with fun and exciting ways to help children love learning and reading," Fuchs Schwartz said. "Now she shares those skills volunteering as a job coach with RAISE," a work and social skills training program by the Jewish Federation.

In the Jewish community, Barbara and Burt are familiar faces, thanks to their hours of volunteer work and their unwavering support of multiple causes that are both local and global in scope.

A Lion of Judah, Chasnov has been active for years as a Federation volunteer. Additionally, the Chasnovs have been passionate supporters of Israel Bonds, the Friends of Israel Defense Forces, and A Gift for Teaching, Central Florida's primary provider of free school supplies to teachers for their students in need. Barbara Chasnov also is a member of the leadership team of a grassroots organization, the ACCoRD Project, whose mission is to advocate for political conversations that address issues and differences with civility, cooperation, dignity and respect.

"Barbara's favorite saying is, 'Don't complain and be a part of the problem, be a part of the solution.'" Yorish said. "Barbara lives this principle. She just rolls her sleeves and gets to work. This is what I love and admire about her."

Throughout her life, Chasnov has reached out to empower others, helping them to overcome some of life's biggest challenges. But it's often the small, personal touches that endear her to friends.

"Barbara always showed so much interest in our girls, Lauren and Dana, while they were growing up," said Karen Selznick, also a Choices 2016 co-chair. "She encouraged Dana through high school and college years in her special-education major, and she has always supported Dana's summer day camp for hearing-impaired children. During Dana's recent wedding, Barbara outdid herself by bringing beautiful creative baked goods and fruit for our out-of-town guests. Our friends and family are still talking about it."

"After Lauren had our first grandson," Selznick added, "Barbara sent them a year's subscription to PJ Library, which he loves to listen to nightly."

Selznick described Chasnov as a role model and "my biggest mentor in life."

"That's just how Barbara is," Porth said. "Always giving, always smiling, always thinking about how others feel. And that's why, when you mention Barbara's name to just about anyone, the invariable response is, 'Oh, I just love Barbara!' Choices 2016 is set for 6 p.m. Tuesday. Feb. 9, at Congregation Ohev Shalom. Registration is now open, and every person who registers before 5 p.m. Monday, Jan. 18, will receive one free raffle ticket. Register online at http://www.jfgo.org/choices, email choices@jfgo.org, or call 407-645-5933 ext. 236.