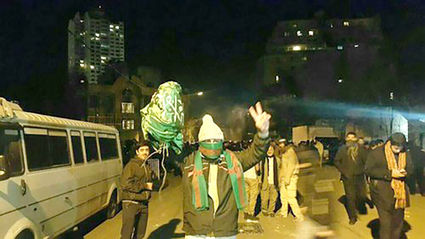 Protesters bring down the Saudi flag at the Arab nation's embassy in Tehran, Iran, on Jan. 2.

The latest explosion of populist conflict between Iran and Saudi Arabia has effectively produced a temporary Middle Eastern Arab alliance with Israel. The common threat of Iran has united the Saudi Arabia aligned Arab world, placing nation after nation on Israel's side in the issue of the security of the Middle East. This security alignment between Israel and the Arabs is besides the Israeli economic and cultural presence that is growing throughout the Arab World and the potential for cooperation expansion in all three areas.

With the cross between populist economic cooperation and strategic cooperation that is part of the Iran Nuclear Deal, the West largely falls on the side of Iran. Additionally, the West has been vocally against the severing of diplomatic ties between Iran and the Arab nations that have affected such breaks. This vocalization is in favor of Iran as such a tactic has been employed against the Iranian government.

The latest conflict was sparked by the announcement on Saturday, Jan. 2, 2016, that the government of Saudi Arabia had executed 47 people on charges of terrorism. One of the executed was Shia Muslim cleric Sheikh Nimr al-Nimr, with a violent anti-Saudi reaction ensuing in Shia Muslim majority Iran. On the night after the execution announcement, the Saudi Embassy in Iran's capital, Tehran, was sacked and burned.

With the Iranian authorities accused of allowing the attacks, on the morning of Jan. 3, the day after the embassy storming, Saudi Arabia cut diplomatic ties with Iran, beginning a cascade of nations doing some form of the same. These nations notably include Bahrain, the United Arab Emirates (UAE), Sudan, and Djibouti as of Jan. 7, 2016.

International observers have expressed deep "concern" at this diplomatic component of the conflict, although potent and violent protests continue from Washington, D.C., to the small Arab island nation of Bahrain. Many of the most violent protestors have been on the side of Iran, and in Iran proper, anti-Saudi protestors burned Israeli flags, as reported by the Boston Globe on Jan. 3.

The Iran/Saudi Arabia conflict has polarized the Middle East in a new way. The nations aligned with Saudi Arabia are effectively aligned with Israel as well, creating a security favorable environment for the Israelis in the Arab World, potentially as a fallout from the Iran Nuclear Deal. Saudi Arabia never deeply supported the Deal, as it created an influx of money that strengthens Iran, a power threat to the Saudis. Israel never supported the Deal either because of security concerns, so lately therefore the same alignment as was present behind the Iran Deal has come out in the open once more.

There are other back stories to the current Arab alignment with Israel as well. After the United Nations General Assembly (UNGA) General Debate in early fall 2015, Bahrain was first noted by Global News Breakdown as effectively easing relations with Israel. This was partially in the context of the Iran Nuclear Deal, as the Bahraini foreign minister expressed extreme distrust at the United Nations with the Agreement, stating that it "does not touch on real problems of the region." The core of their UNGA statements was substantively against Iran as an entity, not just against the Nuclear Deal. Soon after the UNGA General Debate, a Hanukkiah was publicly lit in Bahrain for the first time ever, injecting the important element of populism to the Israel/Bahrain relationship.

Turkey recently made the appearance of making well with Israel over their mutual row from the Israel Defense Forces 2010 Gaza flotilla interception, Turkey being aligned with the Saudis against Iran as of late as well. On Nov. 27, 2015, the Financial Times carried the story, "Israel to open diplomatic mission in UAE," which, as reported by the Times, comes after a long period of intense enmity between the two states. Besides these reports, the UNGA General Debate where Bahrain made their statements against Iran was also the opportunity for other Arab nations to voice similar accusations against Iran as a threat to security and to express populist tension because of Iranian President Rouhani's perceived wrongful placement of blame for the 2015 Hajj Disaster on the Saudi authorities.

The newest realignment of the Middle East against Iran gives Israel the opportunity for increased political and security cooperation with their Arab neighbors. With the hatred of Israelis so pervasive still among Islamist elements in the Arab world, widespread populist level economic or societal cooperation is yet to have a major inroad, but the ground is made ready for expansion in all three areas through the security alignment against Iran.