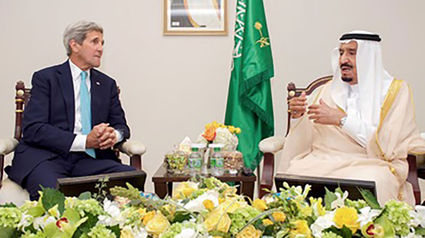 U.S. Secretary of State John Kerry (l) meets with King Salman of Saudi Arabia on Sept. 3, 2015, in Washington, DC. Some experts are linking Iranian-Saudi tensions to the U.S. pullback from the Middle East region and the Saudis' belief that America doesn't have their back.

Amid heightened tensions between the two most powerful Muslim nations in the Middle East, experts say the loudest sound might be American silence.

Sheikh Nimr al-Nimr, a Shi'a Muslim dissident who was arrested in 2012 by Saudi authorities, was one of 47 men executed on Jan. 2 by Saudi authorities in the largest mass execution in decades. While nearly all of the 47 men killed had ties with Sunni Muslim terror groups like Al-Qaeda and Islamic State, the inclusion of al-Nimr set off outrage in Iran, which views itself as the protector of Shi'a Muslims, with the potential of exacerbating deepening sectarian tensions throughout the Middle East.

"Surely, martyr #SheikhNimr will be graced by God & no doubt Divine revenge will seize oppressors who killed him & it is the point of relief," Iranian Supreme Leader Ayatollah Ali Khamenei wrote in a scathing message on his Twitter account following the execution.

The next day, Iranian protesters stormed the Saudi Embassy in Tehran over the execution. This led several Gulf states, including Saudi Arabia, Bahrain, Qatar, and the United Arab Emirates, to cut or downgrade diplomatic ties with Iran. Other Arab allies of Saudi Arabia, such as Jordan and Egypt, have also denounced the attack.

Nevertheless, despite backing opposing sides in conflicts in Syria and Yemen, with the latter involving direct Saudi involvement against Iranian-backed Houthi rebels, the current tensions have not yet led to direct military confrontation.

"The most significant outcome would be if the recent diplomatic tensions would be spill over into violence," Dr. David Andrew Weinberg, a senior fellow and expert on Saudi Arabia and Gulf states for the Foundation for Defense of Democracies think tank, told JNS.org.

With Saudi Arabia and Iran possessing two of the most powerful militaries in the Middle East outside of Israel, direct military confrontation appears unlikely for the time being, especially with low oil prices affecting their national budgets. But Weinberg pointed to a number of indirect scenarios that could develop.

"I think the real question from here is whether pro-Iranian terror groups in places like in Iraq or Bahrain carry out terrorist attacks like they have pledged to do so if the cleric was executed," Weinberg said. "Or, if there could be sustained unrest in Saudi Arabia's eastern provinces that affect oil exports or military confrontation in Persian Gulf waterways."

Despite being the de facto leader of the Sunni Muslim world and home to Wahhabism, a fundamentalist Sunni ideology that has inspired terror groups like Al-Qaeda and Islamic State, Saudi Arabia also has a significant Shi'a Muslim minority community (around 10-15 percent of the population), mainly found in its oil-rich eastern provinces and located close to Iran.

Tensions between the two Saudi Muslim communities date back centuries, and many Shi'a Muslims today complain of discrimination, poverty, and marginalization within Saudi society. Sheikh Nimr al-Nimr, who had spent time studying in Iran, had become an advocate for Saudi Arabia's Shi'a minority, while also being critical of the Saudi monarchy and even espousing anti-American rhetoric, according to a 2008 State Department assessment of al-Nimr that was released by WikiLeaks.

While Weinberg called the Saudi decision to include al-Nimr in the mass execution a "reckless decision," he sees the move as part of a more assertive foreign policy under King Salman, at a time when the U.S. has pulled back from the region.

"I think the U.S. has been relatively disengaged on things that the Saudis care deeply about, like the Syrian civil war and the removal of President Bashar al-Assad as well as efforts to push back on aggressive actions of the Iranian Revolutionary Guard in the region," Weinberg said.

"The Saudis are inclined to lash out because they don't feel America has their back," he added.

Ilan Berman, vice president of the American Foreign Policy Council think tank, echoed Weinberg's assessment, arguing that the Obama administration is breaking with decades of U.S. policy to support its regional allies such as Saudi Arabia.

"The silence out of the White House is deafening," Berman told JNS.org. "In the past, the U.S. would have pushed back against Iran."

Berman attributed America's relative silence on the Iranian-Saudi tensions to fear that putting too much pressure on Iran would give the Islamic Republic an excuse to back out of the nuclear deal, something that President Obama has said is a defining moment of his presidency.

"The nuclear deal was originally supposed to have concessions from both sides, but now it is looking much more lopsided. The Iranians can do whatever they want, because if they (the U.S.) pushes back, the Iranians can just walk away from the nuclear deal," Berman said, adding, "For the Gulf states, this is a very teachable moment. They used to rely on the U.S. to back them and to assert order. However, they increasingly can't expect that."

The move by Saudi Arabia may also have been a preemptive one, as Iran is set to receive a major infusion of cash through $150 billion in sanctions relief as well as increased trade and foreign investment. The sanctions relief comes despite Iran's continued violations of international sanctions. In October, Iran test fired its Emad ballistic missile in defiance of international sanctions against its ballistic missile program. A United Nations Security Council panel in December said that the test violated a Security Council resolution.

The Emad missile is an intermediate-range ballistic missile that has a claimed a range of up to 1,000 miles and is capable of carrying a nuclear warhead, according to U.S. officials.

Despite the violation, the Obama administration has held off on new sanctions, with the international community preparing to lift sanctions on Iran as part of the nuclear agreement reached last summer.

For Israeli leaders, the Obama administration's position on the recent Iranian-Saudi tensions may not come as a surprise. Both Israel and Saudi Arabia came out strongly against the White House's push for the Iran nuclear deal. The two countries have also been more quietly critical of Obama's stances during the Arab Spring, such as not supporting longtime ally Egyptian president Hosni Mubarak during his ouster in 2011, as well as Obama's warm overtures to Egypt's Muslim Brotherhood party, which rose to power after Mubarak.

Additionally, personal tensions between Obama and Israeli Prime Minister Benjamin Netanyahu have been well-documented, with the two leaders not seeing eye to eye on a host of regional issues from the peace process to Iran.

"If I were an Israeli leader, I would sense that at least on a tactical level, there is more room for dialogue with the Saudis than before because they aren't feeling protected by the United States," Berman said.

"I think Riyadh (the Saudi capital) and Jerusalem have been left out in the cold with U.S. reconciliation with Iran," he added.

Despite the diplomatic moves and harsh rhetoric, the tensions between Saudi Arabia and Iran have yet to spill over into direct or indirect military confrontation. Nevertheless, Saudi Arabia's increasing anxiety over an emboldened Iran may continue to fuel greater sectarian tension and conflict in the region.

"Iran, with the nuclear deal, is increasingly on the march, and it is now a question of whether anybody is going to push back," Berman said.