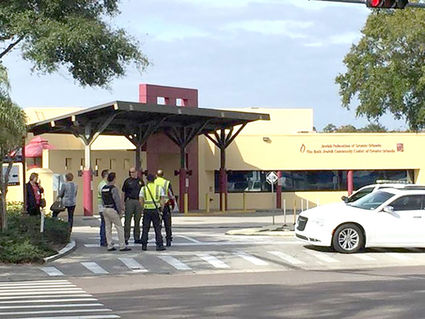 The Jewish Academy of Orlando and the JCC were evacuated Tuesday, Jan. 26, at 10 a.m. because of a bomb threat.

According to the police, a threatening call was made to the JAO by a man who said he wanted to "hurt as many children as possible." The person at the school who reported the threat told police the man's voice sounded robotic, like he was using a device to disguise his voice.

As a result, the entire campus-the school, Early Childhood Learning Center, JCC, gym, and Federation-was evacuated. Parents were called and informed there was an emergency and to come pick up their children, who walked to Lake Sybelia Elementary School, which was also locked down as a precaution.

A bomb-sniffing dog from the Seminole County Sheriff's Office was brought in to sweep the school buildings for explosive material.

Police gave the all-clear at the Center around noon.

"Campus agencies worked closely to ensure that all students, staff and visitors were safe and accounted for. After a thorough search, authorities declared all campus buildings safe. Normal operations will resume Wednesday morning," said Olga Yorish, executive director of the Jewish Federation of Greater Orlando.

JCC Executive Director David Wayne sent out an email alert stating that the JCC campus would be closed for the rest of the day.

"We would like to thank Chief Ball and the entire Maitland Police Department for their diligence and resources, as well as our friends at the FBI. We have a strong relationship with both agencies, who have always, and will continue to, make the security of our campus a top-priority," Wayne stated in an email sent to all JCC members. "The Maitland Police will continue to be a regular, visible presence on our campus, as they have always been. You can assist us in helping to keep our community safe by being vigilant in your observations, and immediately reporting to our staff or the police anything suspicious or out of place."

Yorish also stated that local and federal authorities will continue to investigate the incident.

"We know that hundreds of community members come to our campus daily, and we want to assure you that we will continue to take every measure necessary to ensure a safe and secure Jewish Community Campus," Yorish said.