Rightous Among the Nations ceremony held at Israeli embassy in Washington, D.C. 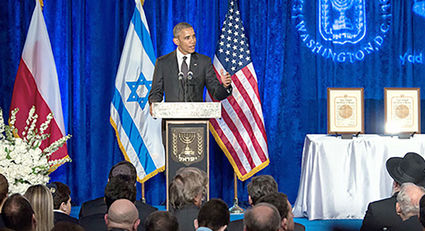 Pres. Obama speaking at the Righteous Among the Nations event at the Israel Embassy in Washington, D.C.

On Jan. 27, 2016, International Day of Commemoration in Memory of the Victims of the Holocaust, and the 71st anniversary of the liberation of Auschwitz, a unique ceremony honoring Righteous Among the Nations was held at the Israeli Embassy in Washington, D.C. President Barack Obama, introduced by filmmaker Steven Spielberg, who is dedicated to recording and preserving the testimonies of those who suffered the horrors of the Holocaust and those who risked their lives to save them, spoke at the gathering.

"Here, tonight, we must confront the reality that, around the world, anti-Semitism is on the rise," Pres. Obama stated, "We cannot deny it. When we see some Jews leaving major European cities because they no longer feel safe; when Jewish centers are targeted from Mumbai to Overland Park, Kansas; when swastikas appear on college campuses; when we see all that and more, we must not be silent."

The event, jointly hosted by the Israeli Embassy, Yad Vashem and the American Society for Yad Vashem, marks the first time that a ceremony presenting medals and certificates of honor to American Righteous Among the Nations was held in the United States.

The Righteous among the Nations, Americans Roddie Edmonds and Lois Gunden and Polish citizens Walery and Maryla Zbijewski, were all recognized by Yad Vashem for risking their lives to rescue Jews during the Holocaust. Yad Vashem, located in Jerusalem, is the world center for Holocaust research, documentation, education and commemoration, and is tasked by the State of Israel to recognize the Righteous among the Nations.

The medals and certificates of honor were accepted on the Righteous' behalf by their next of kin. Holocaust survivors who were rescued by the Righteous, were also present and spoke at the event. In addition to President Obama, Israel's Ambassador to the U.S., Ambassador Ron Dermer, Rabbi Israel Meir Lau, Chairman of the Yad Vashem Council and himself a Holocaust survivor who was rescued by Righteous among the Nations, and Leonard Wilf, Chairman of the American Society for Yad Vashem, offered remarks.

Before the event took place, Yad Vashem Chairman Avner Shalev noted that the thousands of men and women recognized over the past six decades as Righteous among the Nations stood up in a way that went against the active evil or passive silence that dominated their surroundings. Instead, they fought for the universal values that help our common civilization endure and prosper. "We're gratified that President Barak Obama will be participating in this event. The legacy of the Righteous serves to inspire us all, proving that human beings can always choose good over evil", said Shalev. "The president's presence illustrates his identification, and that of the United States, with core moral values."

Leonard Wilf, Chairman of the American Society for Yad Vashem said, "As a son of Holocaust survivors who dedicated themselves to furthering Holocaust remembrance and commemoration, my family and I are committed supporters of continued Holocaust research and education. I believe that this event-honoring American heroes on American soil-has special and unique significance. Not only do we give due honor to these incredible men and women; we also proclaim that despite the years that have passed, these stories carry timeless lessons for us all."

Ambassador Ron Dermer: "It is a great privilege to recognize, on behalf of the Jewish state, the heroism of those to whom the Jewish people owe the highest debt of gratitude. I also deeply appreciate President Obama's acceptance of our invitation to speak at this historic event."

• Master Sergeant Roddie Edmonds of Knoxville, Tennessee, participated in the landing of the American forces in Europe and was taken prisoner by the Germans. In January 1945, the Germans ordered all Jewish inmates in the Stalag IXA POW camp to report the following morning. Understanding the imminent danger in which this would place his fellow Jewish prisoners, Master Sergeant Edmonds ordered all the POWs-Jews and non-Jews alike-to report together. When the German officer in charge saw that all the camp's inmates standing in front of their barracks, he said: "They cannot all be Jews." To this Edmonds retorted: "We are all Jews." Edmonds did not waver, even when the German took out his pistol and threatened to shoot him. "According the Geneva Convention," said Edmonds, "we have to give only our name, rank, and serial number. If you shoot me, you will have to shoot all of us, and after the war you will be tried for war crimes." The German finally gave up and left the scene, and the Jewish POWs were saved from certain death. Paul Stern, one of the Jewish POWs saved by Edmonds recalled: "Although seventy years have passed I can still hear the words he said to the German camp commander."  According to Edmonds' diary, these events took place on January 27, 1945.

• In 1941 Lois Gunden, a teacher of French from Goshen, Indiana, volunteered to work for the Mennonite Central Committee in southern France. She established a children's home in Canet Plage, which became a safe haven for a number of children, including Jewish children whom she helped smuggle out of the nearby Rivesaltes internment camp. Gunden pleaded with the parents to separate from their children and give them to her in order to save them from deportation. Ginette (Drucker) Kalish, one of the children saved by Lois Gunden, told Yad Vashem: "At the time I was 12 years old and certainly scared, but Lois Gunden was kind and passionately determined to take me and these other Jewish children... to protect them from harm."  Gunden fearlessly protected the children when the French police arrived at the home, and ran the children's center even after the United States entered the war and she became an enemy alien.  She continued her work until January 1943, when she was detained by the Germans, only to be released in 1944 in a prisoner exchange.

• On July 22, 1942, the Germans began mass deportations from the Warsaw ghetto. By September 21, Yom Kippur, some 260,000 inhabitants of the ghetto had been deported to the Treblinka extermination camp, where they were murdered. Janina Ferster and her daughter Elzbieta managed to flee the ghetto and go into hiding. After staying for two months at the home of acquaintances, Tadeusz and Eugenia Kucharski, who also received recognition as Righteous, Janina brought her daughter to the home of Walery and Maryla Zbijewski, until she was able to rent an apartment under a false name and take her daughter back. Despite the enormous danger-the Germans publicly announced that helping Jews would be punished by death-the Zbijewskis cared for Elzbieta and protected her until her mother was able to collect her.

Over 60 years ago, when establishing Yad Vashem, the State of Israel made a point of remembering the rescuers, the non-Jews who stood by the Jewish people's side in their darkest hour. Thus, the law establishing Yad Vashem as a center of Holocaust commemoration, documentation, research and education, added another mission to its tasks-to pay tribute to the non-Jews who risked their lives to rescue Jews during the Holocaust. Since 1963, a public commission, headed by an Israeli Supreme Court Justice, has been responsible for making the decision as to who will be recognized as Righteous Among the Nations.  Thus far, some 26,000 individuals have been recognized as Righteous among the Nations, including five Americans and more than 6,500 individuals from Poland, which was at the heart of the Final Solution.

On International Holocaust Remembrance Day and the 71st anniversary of the liberation of Auschwitz, President Obama spoke at the Righteous Among the Nations Award Ceremony at the Embassy of Israel in Washington, D.C. He was introduced by filmmaker Steven Spielberg, who is dedicated to recording and preserving the testimonies of those who suffered the horrors of the Holocaust and those who risked their lives to save them.

"Here, tonight, we must confront the reality that, around the world, anti-Semitism is on the rise. We cannot deny it. When we see some Jews leaving major European cities because they no longer feel safe; when Jewish centers are targeted from Mumbai to Overland Park, Kansas; when swastikas appear on college campuses; when we see all that and more, we must not be silent."