Between a Jewish mother and daughter, the cheesesteak that binds 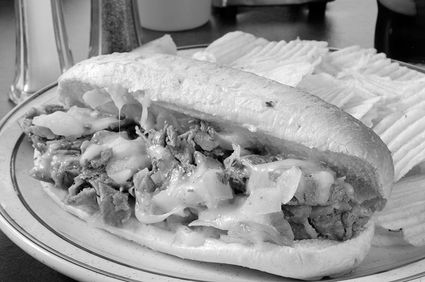 (Kveller via JTA)-My first transgression was a cheesesteak.

I was 6 years old, maybe younger, staring down the gateway to deviance. If my dinner plate were the back page of Highlights for Children, I had the answer in the bag. What was wrong with the picture? A gross violation of church and state. The flagrant commingling, no-outright canoodling-of two items that had no business being together: milk and meat.

At home, we observed the laws of kashrut: two sets of silverware, two sets of dishware, sponges of different colors and pots labeled with waterproof tape. At home, not only did the two food groups not appear at the table simultaneously, but the order of ingestion mattered. Whereas later in high school, I'd live and die by the dictum "beer before liquor," as a child we adhered to this rule of thumb: "Burgers for lunch means no ice cream for hours!"

"Can you keep a secret?" my mother asked. We were at Momma's, a cheerless and aptly named pizza joint adjacent to West Laurel Hill Cemetery in Philadelphia.

I nodded at the foot-long cheesesteak before us. With a plastic knife, she sawed the greasy log in half. My mouth watered. One for me, one for her. Our pagan tradition was born.

Philadelphians, as you've probably heard, have loud, outspoken opinions on who has the best cheesesteak in town. There are Pat's fans, Jim's diehards and, more recently, acolytes of Tony Luke's. My mother and I didn't have time or interest in supremacy of taste. This was the suburbs. We needed proximity and convenience.

I loved having something private, a ritual reserved for just us. This was our secret. Usually we ate right there. It was always Momma's on a Monday for our heart-clogging adventures. I don't know where my father was: working late; at a meeting; playing tennis; coaching my sister's softball team. My sister is not part of this memory, having been too obedient to rebel or, as she asserts, having simply never acquired the taste. Once in a while we got our foil-wrapped rolls to go, then demolished them on our porch.

Technically this was OK. Technically we were not desecrating our home-we sat on the steps, hovered over wrappers. We lived in accordance to don't ask, don't tell. If questioned, we'd say we stopped for pizza.

At that age, I understood life as a simple equation of cause and effect. I was a child of fears. Something terrible might happen at any moment. When we'd read that prayer on Yom Kippur-who should live, who should die, who by water, fire, etc.-I'd picture the Book of Life opening onto a lectern of clouds. Like my Santa-abiding classmates with their "naughty and nice," I believed my false steps carried dire repercussions.

In synagogue, I worried. I worried about cheesesteaks and setting fire to the rug, hacking my sister's sweatshirts to bits. I worried about watching too much crap TV-and then lying about it. I worried about the countless trinkets by the cash register of the 5 & 10 that found their way miraculously up my sleeve.

Our home embodied a wild maze of religious contradictions. Despite his strict upbringing, my father possessed a curiosity about the world. I'd seen him snarf down Roy Roger's roast beef and Gino's fried chicken in other people's kitchens. But there was a line in the kashrut sand that could not be crossed. Where he might cave for a fancy bite of filet mignon, he refrained from lobster, cheeseburgers and pork. My father, I'm still convinced, would rather I become a drug addict than a bacon eater. My mother pointed out his hypocrisy and ate whatever the heck she pleased at restaurants, a fact that fueled countless arguments. But I loved my covert alliance with my mother. The cheesesteak was our quiet rebellion.

Here we were, getting away with shit. This is what was irresistible-more than any allure of salty meat and cheese. My thirst for the verboten deepened, expanded. Quickly, I learned the art of deception. Of acting one way, doing another, keeping things to myself. Cheesesteak night forged a two-sideness to my character. For many years, I saw myself as a child divided. Get good grades, be a good girl. Then, go be bad. Treif was the least of my offenses.

To be clear: I was bad-for a nice, Jewish girl.

Eventually the novelty wore off. I grew up. Sneaking around lost its appeal. More than anything, I began longing for all the disparate parts of me to come together as one.

Although I haven't had a cheesesteak for 20 years, contradictions persist. We don't keep a kosher home. My husband eats everything under the sun. My son, joyously, shares his father's palate. My daughter has never met a salami she doesn't love. While I may no longer indulge in my ol' Philly standby, I remain a flagrant mixer of dairy and meat. I'll spring for the rare oyster. My father is scandalized. He beats his breast, "When each generation becomes more and more watered down, what will become of us?"

And yet, here we are, actively trying to raise mensches. Good people, with full and open hearts, yiddishe neshamas. My kids attend progressive day schools, where they are taught Hebrew and Jewish values and to love who they are, where they came from, to celebrate their vibrant and important past and to embrace the people they are becoming.

Every morning I pack a dairy lunch in accordance with school code, even though I don't believe goodness is tied to diet. I hope my children continue to passionately engage these old texts in fresh, probing ways and eke out their own traditions.

We're a family, united. And yet, unlike the rest, I can't bring myself to adopt their boundless gastronomy. Why not go whole hog? I don't know if it's lingering superstition, cultural indoctrination, an age-old fear, nostalgic respect for my father or something else entirely. Maybe I need to hold back on this final frontier so that there is still a place left to go, should I ever feel again the pull to transgress.

Sara Lippmann has written for American Baby, GQ, Details and other magazines. She co-hosts the Sunday Salon, a monthly NYC reading series, and lives in Brooklyn with her family.