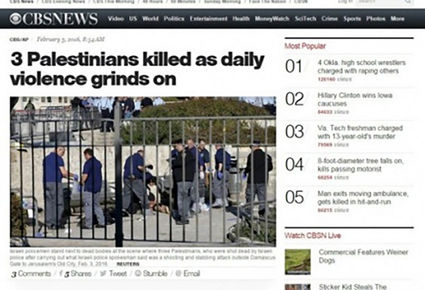 The original CBS headline on the Palestinian terror attack near Jerusalem's Damascus Gate on Wednesday.

(Israel Hayom/Exclusive to JNS.org)-The Israeli Foreign Ministry slammed CBS News on Wednesday over its report on a terrorist attack near Damascus Gate in Jerusalem, which carried a headline reading, "3 Palestinians killed as daily violence grinds on." The Palestinians identified in the headline were actually the terrorists who carried out the attack, which killed 19-year-old Israeli Border Police officer Hadar Cohen.

Foreign Ministry spokesman Emmanuel Nahshon blasted the media outlet's "gall" for focusing solely on the deaths of the Palestinians, and ignoring the fact that they were terrorists. This was "unprecedented chutzpah, a slanted and false headline," Nahshon said.

After the Foreign Ministry, as well as Israel's National Information Directorate at the Prime Minister's Office and Government Press Office, all contacted CBS, the headline was changed to "Israeli police kill 3 alleged Palestinian attackers." It was later changed again, to "Palestinians kill Israeli officer, wound another before being killed."

Government Press Office Director Nitzan Chen said, "This will not be tolerated. This time we will consider revoking the press credentials from reporters and editors who neglect to do their job, and present readers with headlines that have nothing to do with reality."