Not your typical spelling bee at Orlando Jewish Day School 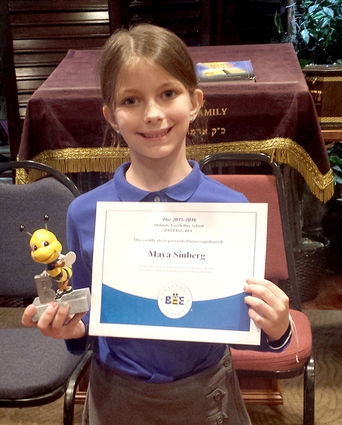 When parents of students in grades K-5 gathered for Orlando Jewish Day School's annual spelling event on Tuesday, they were both amused and surprised to find that it was more of a high-tech school spelling performance. A large welcoming screen greeted the audience, with student names projected in various colors onto a large, white wall. Soft music played in the background, as the participants were introduced to the rules of the bee.

"We think of this more as a spelling celebration," said Dini Druk, the bee's coordinator. "We are celebrating the achievement of all of our students in spelling, and we are excited to present you all with what they've accomplished."

The bee began with a presentation by Simcha Dubov, a student with Down's Syndrome who attends the school with the assistance of a personal para. "My name is Simcha, and I'm 11 years old," he began, before proceeding to read and spell a series of words presented to him by his para, Ms. Christina. The students clapped and cheered for Simcha, as they seemed to be genuinely proud of his accomplishments.

Next up, the kindergarten class surprised the audience with their own segment of the spelling bee, in which they successfully spelled almost two dozen words while watching their names light up on the wall with every point scored.

Before moving on to the more competitive element of the bee, students in grades 1-4 participated in a live game show, during which teams of students worked to unscramble and correctly spell words presented on the screen in real time. Parents were invited to try their luck as well, and students cheered them on, clearly delighted to see their parents involved in the spelling competition.

As the bee progressed, students were invited to move onto more competitive segments, culminating in a traditional spelling bee for the school's top spellers. 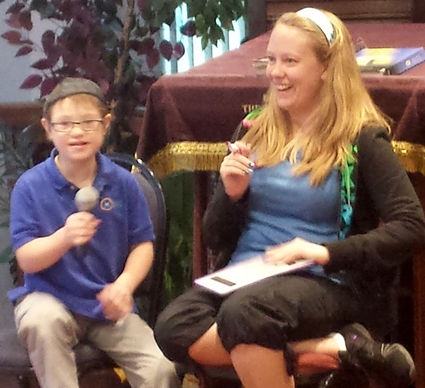 "The beauty of this type of spelling bee is that we are promoting rigorous academics and encouraging healthy competition, while still allowing every child to shine," said Chani Konikov, the school's director. According to Konikov, the school's high-level academics surpass Florida State standards yet remain highly individualized, thus allowing for students on multiple levels to each be challenged. "A large percentage of our students are great spellers, and we are encouraging them to aim for Washington, D.C.," she said, referring to the final level of Scripp's National Spelling Bee of which the school is a member. "Other students have different strengths, but that doesn't have to stop them from participating in the school's spelling program."

In the final round, a winner was selected from every grade level, with third-grader Maya Sinberg taking the trophy as the school's spelling champion. A representation from Orlando Jewish Day School will participate at the county level bee later this month, sponsored by the Orlando Sentinel.

For more information about Orlando Jewish Day School and its offerings in South Orlando, visit http://www.orlandojewishdayschool.com