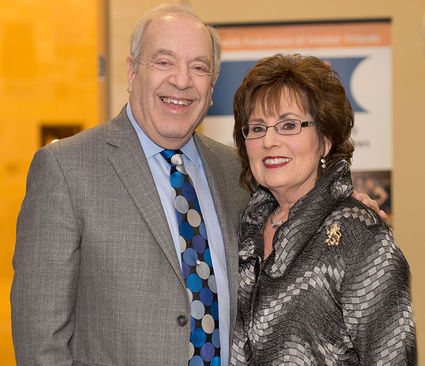 More than 400 women-and more than a few men-from the Greater Orlando Jewish community gathered at Congregation Ohev Shalom in Maitland on the evening of Feb. 9 to "Celebrate the Spirit of the Woman" at Choices 2016.

Choices, which is put on each year by the Jewish Federation of Greater Orlando Women's Philanthropy division, is simultaneously a party, a fund-raiser and an opportunity to pay tribute to an outstanding woman in the Jewish community. This year's honoree was Barbara Chasnov, who now carries the title "2016 Harriet Ginsburg Woman of Choice."

While the evening featured an abundance of great food, music and socializing, it was a surprise announcement during the speakers' presentations later in the program that stole the show.

At the conclusion of JFGO Board Chair Rhonda Forest's speech, she introduced longtime Federation supporter Alan Ginsburg, who issued a challenge to all those in attendance: The Ginsburg Family Foundation would match all new gifts and gift increases made that night at Choices.

The Ginsburg Family Foundation has been a major supporter of JFGO's Choices, generously underwriting part of the cost of the event in years past.

"The Ginsburg Foundation's match really raised the stakes this year," Forest said after the event. "It was a bold challenge, but that's what we have come to expect from Alan," she added with a smile. "His generosity has been a blessing for Federation for many years, and it was heartening to see so many women at Choices take him up on his challenge."

While the final numbers are still being tallied and a few pledges are still coming in, the amount raised at Choices for JFGO's Annual Campaign "well exceeded" last year's, JFGO Executive Director Olga Yorish said. "We had high expectations, but the Ginsburg Family Foundation match, paired with the generosity of our supporters, exceeded even those expectations."

Yorish noted a dramatic increase in the number of younger women attending Choices, which she calls "a promising development."

"The influx of youth into this event has been phenomenal," Yorish said. "For the second straight year, we saw so many new faces that we know will become familiar ones. I thought our featured speakers did an excellent job of educating this new generation about what Federation does and how their Annual Campaign dollars are used to help Jews here and abroad." 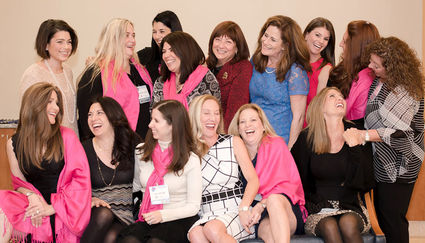 There were new, young faces at Choices this year. Many of the Orlando delegation of women who took part in last fall's Jewish Women's Renaissance Project MOMentum attended (wearing their pink Pashminas).

Also in attendance at Choices: nearly the entire Orlando delegation of women who took part in last fall's Jewish Women's Renaissance Project "MOMentum" trip to Israel. Many of the ladies arrived sporting the signature pink pashminas they wore during the trip.

"It was gratifying to see the bond they have forged," Yorish said. "These women, in many ways, are the nucleus of the young women's Jewish community in Orlando."

"These three women and the Choices Ambassadors really delivered for Federation," Forest said. "Just the corporate sponsorships alone for Choices were phenomenal," eclipsing 2015's sponsorship total by more than 1,500 percent.

The Choices Raffle was also a resounding success, topping last year's total raised as women purchased tickets for a chance to win one of more than $7,500 in prizes.

You can view more than 100 photos from Choices 2016 by visiting http://www.jfgo.org/choices.