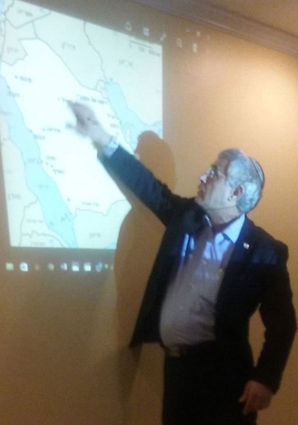 Dr. Kedar uses a map of Israel to illustrate a point.

Middle East affairs expert Dr. Mordechai Kedar spoke at three events across Central Florida during the first two weeks of February 2016. The first event, on the evening of Feb. 4, was at Chabad of North Orlando, while the other two were back to back on Feb. 9, the first hosted by Chabad of UCF and the second hosted by the UCF Student Group Knights for Israel.

As Kedar explained at UCF Chabad, the real reason behind the contention over Jerusalem is key to the entire issue that the Palestinians and their supporters have with the Israelis. This reason is that the return of Jews and their religion to the Temple Mount threatens the perceived legitimacy of Islam, as Islam asserts that it is preeminent and replaces all other religions. If the Jews return, then that deals a major blow to the Islamic replacement claim.

Thus, Kedar, with only facts, tore apart the Islamic claim to Jerusalem, revealing it as nothing more than a ploy. The crusade to remove the Jews from East Jerusalem and beyond has no basis in actual, let alone "peaceful," rites of the Islamic religion. The tension is only based out of an attempt by the Islamic religion to appropriate the sanctity of other religions for itself. Jerusalem as holy to the Muslims is not original to the faith, the city is never mentioned in the Koran, and it was not recognized as of any importance by the Muslims until many years after the death of Mohammed, founder of Islam.

At his other two venues, Kedar showed the depth of the issues plaguing the "hell" found in so many Middle Eastern countries and in doing so, flatly repudiated the imaginary impact given to the Israeli-Palestinian conflict on the overall stability of the Middle East region. He systematically explained what the real problem is in the Middle East, hinging upon the deep, four-pronged divisions in, for example, Iraq; these four populist divisions defining the Middle East being tribal, ethnic, religious, and sectarian.

Israel even experiences its own version of this issue of deeply embedded divisions, since, as Kedar stated, there is no "Israeli nation," so to speak. There are Jews, Arabs, and others, but they remain distinct. The conflict potential inside Israel, however, is addressed by democracy, since, in such manner, each individual group can make the contribution of defending their self-interest in the national arena.

Israel, though, as is important to note, is not a "democracy on a suicide mission," and the state does not allow democracy to get in the way of security. In that manner, Israeli citizens who join the Islamic State, according to a new Israeli law, automatically have their citizenship revoked.

Across the rest of the region, it is largely because of the Western backed attempt to force the dissolution of the ethnic divisions under the heading of imagined nations like Iraq and Syria that the region largely stays in enduring conflict. The reason for the few islands that do not experience perpetual war, like the United Arab Emirates, Kuwait, and Qatar, is because each of these nations is small and consists of individual tribes, or, in the case of the Emirates, consists of independent tribes in a federation.

Out of this understanding of the dynamics of the Middle East, Kedar proposes the 8-state solution the Israeli- Palestinian conflict. The 8-state solution refers to the creation of a total of seven independent Palestinian "emirates," each centered along the natural Middle Eastern division of clan, after the model of Qatar. Such a "viable" plan would remove the additional conflicts injected by the push of the unnaturally centralized society onto the Palestinian people.

Additionally, such a plan could serve as the model for additional reform across the Middle East, perhaps starting with the arrival of independence for the Kurds, since, as Kedar, noted, there never has been and never will be a Syrian, Iraqi, Iranian, or similar nation. These national identities are "imaginary." The only natural divisions in the Middle East center on clan and tribe and extend no further, with each tribe generally sharing religion, language, and resources.

Kedar is Research Associate at Bar-Ilan University's Begin-Sadat Center for Strategic Studies in Israel, and his proposal regarding the "Palestinian Emirates" can be found at palestinianemirates.com.