Local FASTSIGNS® recognized among top centers in the country 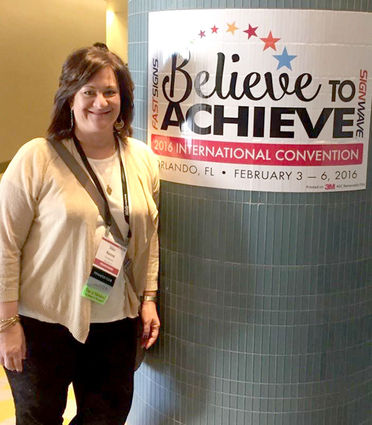 Renee Friedman at the 2016 FASTSIGNS International Convention held in Orlando.

Local sign and visual-graphics provider FASTSIGNS® of Orlando-Central, owned by Renee Friedman, was named one of the top centers out of more than 600 locations worldwide at the 2016 FASTSIGNS International Convention, recently held in Orlando.

The locally owned and operated, business received the Pinnacle Club Award, which is given to the centers ranked 26 to 125 in the U.S. and Canada for sales volume between Oct. 1, 2014 and Sept. 30, 2015. Friedman, who also happens to be the only female, Jewish owner in the Orlando FASTSIGNS market, also was awarded a trip to Mexico for outstanding sales increase in 2015.

"It's an honor to be recognized as a top performing center and this award acclaims all of our team's hard work and positive contributions in our community," said Friedman. "We thank our customers for their support and trust and look forward to continuing to help local businesses and organizations tell their story using comprehensive signs, visual graphics and creative marketing solutions."

This isn't the first award Friedman has received as the owner of FASTSIGNS of Orlando. Previously from Dallas, Texas, where she was general manager of three FASTSIGNS centers, Friedman moved to Orlando in 2001 to buy the FASTSIGNS located at 5000 E. Colonial Drive. Within one year, the store, staff and market were rejuvenated, increasing store sales by more than 125 percent. As a result, she was named Resale Newcomer of the Year at the FASTSIGNS 15th annual National Convention in Reno, Nev. Over the following 15 years, Friedman's center received more than 10 more Sales Achievement Awards.

"Surviving the recession and bringing my FASTSIGNS Center back to a thriving business was a huge lesson on perseverance," she told the Heritage.

Friedman has not only been running the store, she and her daughter, Haley Codron, have been involved in the Jewish community since moving here. Haley went to the JCC Preschool from the time she was 15 months old to pre-K, and then she attended the Jewish Academy up through fifth grade, while continuing to attend JCC aftercare and summer camp.

Friedman is an active member at Congregation Ohev Shalom, where Haley became a bat mitzvah in 2013 and is involved in USY and plans to go to Israel this summer with NFTY.

"My FASTSIGNS center provides signs for many organizations and companies throughout Orlando and also makes donations to Ohev, JFS, JAO and the JCC," she said.