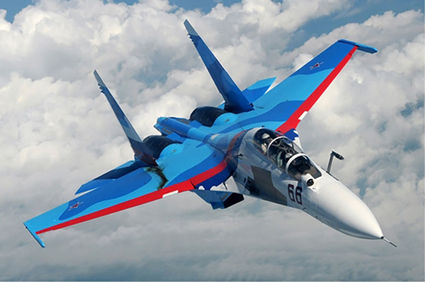 Russia's Sukhoi Su-30 aircraft, which will reportedly be delivered to Iran.

(Israel Hayom/Exclusive to JNS.org)-Iran was expected to receive its first S-300 air defense system from Russia on Thursday, Russian media reported Wednesday. This will be the first the major weapons deal to be implemented in the wake of last summer's nuclear deal between Iran and world powers, which brought an end to most of the international sanctions on Iran.

A Russian official denied the report later on Wednesday, telling the state-run Russian news agency TASS that there were still outstanding payment issues. Another Russian state news agency,RIA, reported that Moscow and Tehran were expected to sign a procurement deal for the delivery of Sukhoi Su-30 aircraft.

The recent lifting of sanctions also means Iran will now be able to engage in international commerce through the Society for Worldwide Interbank Financial Telecommunication (SWIFT), a network for global financial transactions. According to a SWIFT official, several Iranians banks have recently been reconnected to the system, which is an integral part of the global financial system. Some 30 Iranian banks were disconnected from the system in 2012 as part of the effort to pressure Iran to curtail its nuclear program.

Indian media reported Wednesday that Iran would be able to use SWIFT to lay its hands on some $6 billion generated from oil deals with India. Those funds were frozen while the sanctions regime was in place.