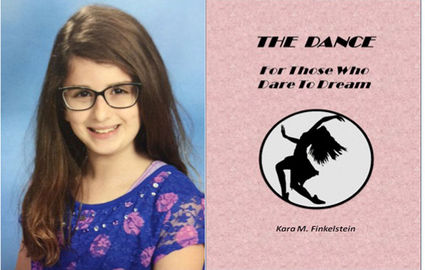 In August 2014, The Heritage ran a story about Kara Finkelstein, who, at the age of 10, published her first book. The story was about a young girl named Bella who explored a magical forest and found two horses named Crystal and Rebel. Titled "The Forest: A Magical Adventure of Crystal and Rebel," the story is full of excitement and suspense as Bella plans a way to save her friends. In the Amazon review, Finkelstein's book is compared to J.K. Rowling's "Harry Potter" series.

Now, a year and a half later, Finkelstein is in the sixth grade, 12 years old, and has released her second book, titled "The Dance: For Those Who Dare to Dream." Twice as long as the first book, Finkelstein shines as she writes a first-person, closer-to-real-life story about a young girl's up-and-down experiences as she participates in dance competitions, eventually being chosen to dance on Broadway.

The story is based in part on her own life. Finkelstein, who "dreams big," wrote this book because it is based on a dream of hers to dance on Broadway one day. She has been dancing for a few years and just entered her first competition last Sunday. Unlike the main character in her book, she has not been on Broadway to dance. "I have been to many Broadway shows and I hope my future in dancing leans toward Broadway!"

Finkelstein's inspiration has always been her teachers-from her days at the Roth JCC Early Childhood Learning Center to her teachers at John Evans Elementary School and Tuskawilla Middle School. Their encouragement and her love of writing and dancing led to this second book, which took about a year to write. "I'm pretty busy with dance and school, and I took a few breaks here and there," she told The Heritage.

A third book, a sequel to "The Forest," is in the works.

"Without giving too much away," Finkelstein said. "Bella's mother has a baby named Amber and Amber goes missing. Therefore, there are only two horses that can save the day: Yeager and Angel, with the help of Bella and her friends."

Through her writing, Finkelstein encourages others to dream big and "never underestimate yourself-just do it!"

"The Dance" is available worldwide at Amazon, Books-a-million, Barnes and Noble and iTunes. It is also available at the Seminole County Library.