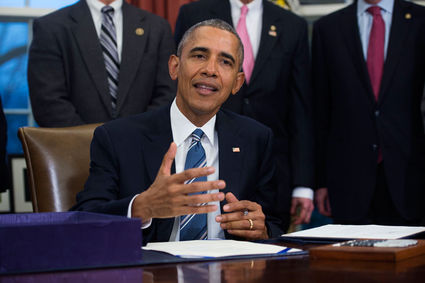 WASHINGTON (JTA)-The controversy over whether laws protecting Israel from boycotts should include West Bank settlements found its way into a presidential signing statement this week, but President Barack Obama's decision to ignore a trade law's requirement to oppose boycotts of Israeli settlements likely won't settle the argument.

The president said Wednesday he had signed the Trade Facilitation and Trade Enforcement Act of 2015 and embraced its provisions protecting Israel from the Boycott, Divestment and Sanctions movement, or BDS. But Obama also said he would not observe the measure's requirement to extend those protections to businesses in "Israeli-controlled territories."

"I have directed my administration to strongly oppose boycotts, divestment campaigns and sanctions targeting the State of Israel," he said. "As long as I am president, we will continue to do so. Certain provisions of this act, by conflating Israel and 'Israeli-controlled territories,' are contrary to longstanding bipartisan United States policy, including with regard to the treatment of settlements."

Using language that has appeared previously in signing statements to indicate a president will not implement parts of bills that do not comport with U.S. foreign policy, the statement added that "consistent with longstanding constitutional practice," Obama would continue to negotiate with other countries "in a manner that does not interfere with my constitutional authority to conduct diplomacy."

Obama's statement is the latest salvo in an intensifying battle over whether the United States should differentiate between economic activity in West Bank settlements and Israel proper. Proponents of eliminating the distinction say there is little difference between Israel and the West Bank when it comes to countering BDS, while others contend that lumping in settlements undercuts the wider effort to counter the boycott movement.

The argument is already playing out in 22 state legislatures that are considering anti-BDS bills-some of which explicitly protect businesses operating in the settlements, while others extend protections only to Israel proper. It also cropped up in January in the controversy over the reissuing of customs regulations requiring goods produced in the West Bank to be labeled as such.

Both Illinois and South Carolina have enacted laws in the past year that include protections for settlements. The Florida Legislature did the same this week, and a similar bill was introduced this week in Ohio.

In Washington, a bill introduced earlier this month would remove federal obstacles for states seeking to divest from entities that boycott Israel. The bill names as its target those who would use economic means to harm "Israel or persons doing business in Israel or in Israeli-controlled territories." The American Israel Public Affairs Committee backs the bill.

AIPAC, along with the Jewish Federations of North America and the American Jewish Committee, is also backing a nonbinding resolution in the House of Representatives opposing new European Union rules that label settlement goods. Rep. Pete Roskam, R-Ill., who authored the resolution with Rep. Nita Lowey, D-N.Y., said he doesn't see a difference between BDS and moves to label settlement goods.

"The motivation for people who are pushing the BDS movement and some who are behind the EU labeling law is not the welfare and good wishes to the State of Israel," said Roskam, who along with Rep. Juan Vargas, D-Calif., authored the language in the trade act signed Wednesday by Obama.

Lowey, in an email, said the European labeling "propels the BDS movement."

"The EU's new labeling policy also represents an attempt to extract concessions from Israel outside of the peace process, and therefore makes it much harder to ever resume direct negotiations between Israelis and Palestinians," she said.

Jeremy Ben-Ami, the president of J Street, which is lobbying against the Roskam-Lowey resolution, said lumping Israeli products with settlement goods undercuts broader efforts to counter the BDS movement. J Street's university affiliate has taken a lead role in pushing back against BDS on campuses.

"When the distinction between Israel and the green line is erased, there is a danger," Ben-Ami said. "You're putting your nose under the one-state tent when you conflate the West Bank and Israel."

Lara Friedman, the government affairs director for Americans for Peace Now, which has monitored the anti-BDS effort at the state level, says the effort to extend protections to settlement products is an effort to undercut longstanding U.S. policy.

"Without even a whisper of honest debate, an historic shift in U.S. policy is quietly being legislated-a shift that, if left unchallenged, will have devastating consequences for the possibility of any peaceful solution to the Israeli-Palestinian conflict," Friedman said in an email.

In January, the Customs and Border Protection Bureau restated 20-year-old rules requiring labeling of goods from the West Bank. JTA has learned that the reissued rules followed several complaints filed by activists seeking to ensure that the United States abides by its own policy of distinguishing economic output from Israel and the West Bank.

Sen. Tom Cotton, R-Ark., responded to the bureau's announcement by introducing a bill to override the rules. He was joined by Sen. Ted Cruz, R-Texas, a candidate for the Republican presidential nod. The Zionist Organization of America accused the Obama administration of changing U.S. policy.

The bureau, a division of the Department of Homeland Security, insisted the guidance was routine and issued after a series of complaints.

"CBP's January 23rd message was simply a restatement of existing requirements and was issued in response to recent mislabeling allegations received by CBP," a spokeswoman told JTA in an email.