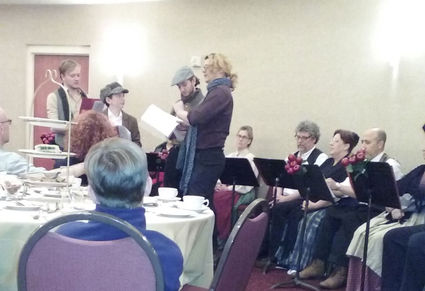 The Orlando community hasn't had too many concert readings that I am aware of, and have we been missing it! Recently, The Lowndes Shakespeare Theater put on a concert reading of "Out of the Apple Orchard," based on local author Yvonne David's book adapted for the stage by Ellen W. Kaplan. Originally produced in New York City by Nicole Raphael, Davis bought the copyright of the stage script and brought it home to Orlando.

Guests of the sold-out event enjoyed an afternoon tea, complete with sandwiches and scones and other delights provided by Arthur's Creative Events & Catering.

It was a brilliant performance, with a host of local actors, including several Jewish community members-Rabbi David Kay, Mark Davids, Jordan and Ari Weiss, to name a few-and was directed by Kerry and Amanda Giese from Theater at the J.

Jordan Weiss, who read the part of the star character, Adam, gave an effortless portrayal of a young boy who steals apples for his family because his father (played by Rabbi Kay) is very ill. Rabbi Kay was so impressive as the sick father that I almost felt the need to move a few chairs away and cover my nose as he coughed and gagged through his reading (no worries, Rabbi Kay is healthy and well, just a good actor).

Both Mama and Bubbe (Cindy Kennaugh and Jac LeDoux, respectively) were completely convincing as they read their parts in impeccable Yiddish with Eastern European accents.

In addition to the superb character readings, there were times when the readers got up from their chairs and acted out scenes. After all, the audience really had to see how big the hat was that Adam had to wear (the better to hide apples under).

Debra Kilsheimer, concertmaster of the Volusia Community Symphony, lent her talents as violinist so the audience could "hear" the chirping of an annoying redbird that taunted Adam as he stole apples.

The story, which takes place around Rosh Hashanah, weaves together the theme of apples, forgiveness and new beginnings. (The audience even enjoyed apple cake after the reading). Now Davis plans to produce a play of "Out of the Apple Orchard" in the fall, just in time for Rosh Hashanah.

If the concert reading was enjoyable, how much more entertaining the play will be. Perhaps many of the same readers can reprise their roles in the stage production.

Heritage will keep its readers abreast of new developments.