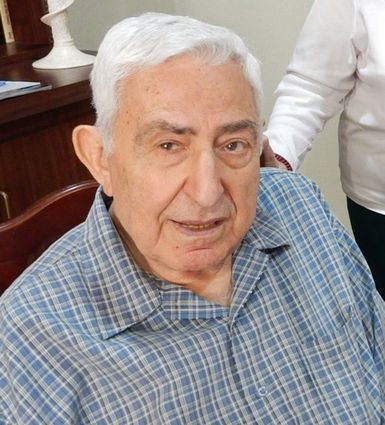 As a Jewish Pavilion program director visiting Jewish residents in nursing homes/independent and assisted living/rehabilitation facilities in Southwest Orlando, I am fortunate to have gotten to know Sasson Bechor, who is newly arrived in Orlando. Anyone fortunate to meet and talk with Bechor will learn how proud he is to have a Jewish heritage that goes back 2600 years to the year 586 BC. That history is significant in Jewish tradition. That was the year Nebuchadnezzar conquered Jerusalem by breaking through the city's walls. Solomon's Temple was totally destroyed, Jerusalem plundered, and many Jews were taken in captivity to Babylon. Fifty years later, when Babylon was overthrown by the Persians, 40,000 left to return and rebuild the temple in Jerusalem, but 80,000 chose to remain and life under the Persians flourished.

Among the great leaders and sages produced by the Jewish community in Babylon were Ezra the scribe, who led the returnees back to Jerusalem and laid the foundations for later rabbinic Judaism; and the sage Hillel, who is associated with the development of the Mishnah and Talmud.

Bechor is descended from Jews who chose to remain in Babylon, now Iraq. He was born in Amara, Iraq. Amara is next to the Tigris River in southeastern Iraq, south of Baghdad and about 50 km from the Iranian border.

Bechor came from a family with five boys and two girls who grew up in Iraq amid predominantly Moslems and a few Christians. For all three faiths, Abraham was the revered prophet, but Moslems were taught that Ishmael, not Isaac, was the "chosen" son. The Jews there had the Babylonian Talmud vs. the Jerusalem Talmud. The Jews not only did not assimilate, but developed a strong study of the Talmud. Bechor is proud that the Babylonian Talmud was later adopted by Eastern Europe as a cornerstone for Jews living there.

Living as a Jew in Iraq: There were no divisions among the Jewish population in Iraq into Reform, Conservative or Orthodox. All practiced Jewish traditions 100 percent. All Jews honored the Sabbath, thus the advantage of owning your own business-you could lock up shop and go home, where the mothers would be found cooking in preparation for the Sabbath. Ten percent of the children went to the local heder, 90 percent of children went to the Jewish school. There, a general curriculum in Arabic was followed, with two hours a week with a Hebrew teacher who taught biblical Hebrew. With separate schools for Jews, celebrating Shabbat and Jewish holidays was not an issue. No school lunches were served-kids would bring sandwiches from home. There were separate schools for boys and girls, both in session all day. Bar mitzvahs were "not a big deal" for the boys, who always went to synagogue with their dad.

"Mothers were always pregnant." Families would have so many kids, it was necessary to have strict discipline in school. There might be as many as 60 - 65 kids in a class with no air conditioning or heating, actually no electricity! While there was a ceiling fan, it had to be hand rotated with the kids taking turns. The teachers were mostly men. The discipline: painful raps on the hand with a sharp ruler.

"Shabbat was wonderful." The kids dressed up and would play together. "It was like a shtetl with lots of kids." Lighting any kind of fire, including smoking, and using any kind of electricity on the Sabbath was strictly taboo. There was only one set of dishes-"The Ashkenazi took our rules and made them stricter." At any Jewish butcher shop, there was no need to ask if the meat was kosher.

The Bechor family moved from Southern Iraq to Baghdad in the 1930s.  There were approximately 130,000 Jews in Iraq at the time. A pro-Nazi coup in April 1941 sought to incite locals to kill the Jews in Iraq. The Nazis took over the airwaves. Hundreds were killed in a pogrom during Shavuot (June 1-2) 1941. Jewish homes were marked, penetrated, occupants raped, maimed and killed.

"My mother was pregnant and threatened with a knife-the attacker was convinced the bulge was hidden gold," said Bechor. "Over 180 Jews were killed, 1000 injured and many homes destroyed. Not all Moslems participated. My parents vowed that as soon as we had the opportunity, we would leave. A lot of families bribed professional smugglers, including Bedouins, to smuggle their teenagers across the border into Iran or Turkey. The Jewish Agency would then get them to Palestine (pre-1948) or Israel."

For Bechor's family, that opportunity to leave Iraq came in 1950, when the Iraqi government granted Jews the right to leave-they need only renounce their citizenship (at central centers) and vow never to return. Australia, Canada and the U.S. arranged an airlift, chartering planes from Alaska Airlines with experienced WW II pilots to airlift Jews to Israel in Operation Ezra and Nehemiah. After 2500 years in Iraq, Jews need only check local centers for posted flights and names-and then secure exit visas. No money or belongings could be brought out. They left with just an egg sandwich provided by local Jewish organizations and the clothes on their back.

Bechor was 18 1/2 when he arrived in Israel on March 21, 1951 and settled in a tent at an absorption center with his parents and six siblings (he was the oldest). Back in Iraq, Bechor had gone only to elementary school during the day, and then went to middle and high school at night in order to work during the day in a Muslim-Jewish import/export office in order to help support his family. When he left Iraq, he was three months short of finishing high school. It took him four years to finish those three months as he had to go into the Israeli army first and learn Hebrew. He had to transform himself-not just learning in Hebrew instead of Arabic, but experiencing the requisite transformation of culture, information and personality as well. Once he got his high school diploma-in Hebrew-he worked at a power plant in Ashdod, Israel, where he was trained to operate the control room of the power plant. Bechor then attended night school at Hebrew University, earning an undergraduate degree in economics and statistics. He met his wife, who was from Riverdale, N.Y., (recently deceased) when both were working on a kibbutz. They married in 1965 and moved to the U.S. in 1966. It was after marriage and moving to America that Bechor got his MBA at NYU, and eventually became a CPA in Georgia.

Long retired, Bechor currently lives in a senior facility on the south side of Orlando.

The Jewish Pavilion has Passover seders scheduled at over 50 senior facilities during April. Residents of all faiths enjoy the programs. You can make a difference in the life of a senior. For volunteering opportunities or to make a donation visit http://www.jewishpavilion.org or call 407-678-9363.